Fine Fall Trout, and the Folly of a Reel. 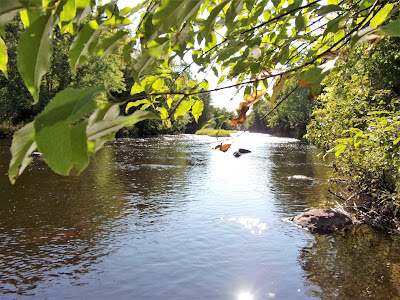 Fall trout fishing can be some of the finest if you hit the right conditions. The fish love to binge eat just ahead the fall spawn and are apt to strike at lures again after being insectivores for most of the last couple of months. As the hatches wind down, minnow feeding once again, ramps up.

There are a few things that can hamper autumn river fishing though, and a couple of those things are flocks of migrating fish eating ducks like mergansers and too many leaves flowing with the current under the surface. At the end of the season it's not unusual to snag a number of leaves on every cast. The window for good stream fishing here in the Northland can be short depending on the peak of the fall colors and the inevitable leaf drop that will soon follow.

I wanted to beat the leaf drop this year and hit a couple of holes that regularly produce nice fish for me. It was a beautiful early fall day with temps in the mid 60's and with steady barometric pressure I was anticipating some good action. I didn't get a chance to get out in the morning but thought the afternoon might be productive, so off I went.

This time of year I'm always on the look out for mushrooms. No matter what I'm doing in the woods my 'shroom radar is on and this trip was no exception. I wasn't disappointed on the hike in because I stumbled across a nice trove of chanterelles. I made a mental note of there whereabouts for collection on the way back and continued on to my destination. 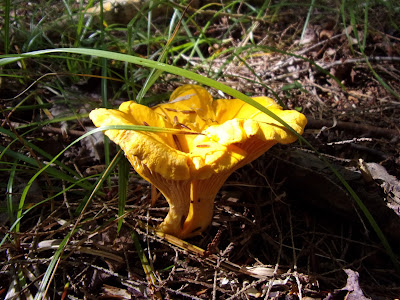 I arrived at the first spot where I wanted to test my luck. I always try to pause, while hidden in the tree line above the river for a short time to observe any stretch of water I'm going to fish. Especially if the water isn't high and turbid. Many times I have done this and have noticed trout feeding or even swimming around. After watching said fish's habits, I can plan out my approach to make an unseen cast to my quarry.  Today I noticed no activity so I made my way down the river bank and slid, slowly into the water. Conditions looked good.

A precise first cast revealed nothing and two more casts evoked what felt like a slight "bump" that may have been a fish. I gave it some time and ran my spinner through the same current line and felt the strike I was waiting for. A solid hook up revealed a nice brook trout that was keen for the fight. I played the fish out and netted the beautiful male all ablaze in it's fall spawning regalia. Much like the vibrant leaves, the char's skin can evoke a sense of awe when gazed upon in the fall. 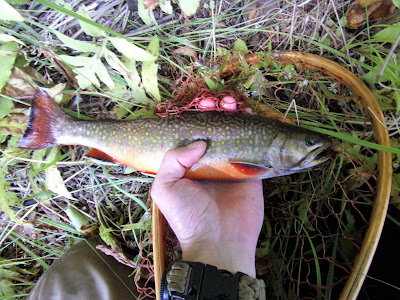 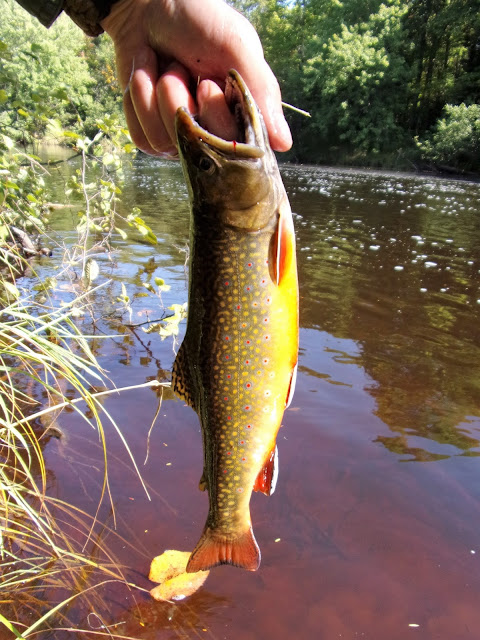 I took a few photos and added the chunky char to my creel. The day was already a success with just that fish. 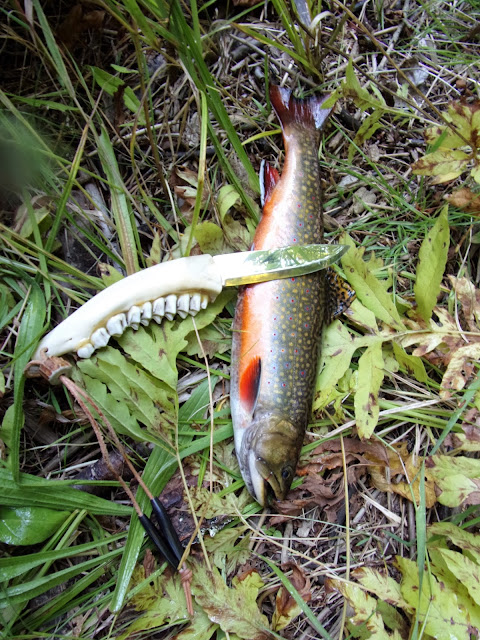 Back in the river, I turned my attention to the far side of the pool and promptly hooked into a nice fish on my second cast. The fish pulled and strained against the line. It was a good one, but what? As I fought it in closer it rolled and I seen it was nice brown. I made sure to play it out enough before trying to net it. Fish number two was in hand and the makings a fine trout meal for family was coming to fruition. I marveled at the male's yellow and mocha coloration with cream rimmed dots. Another fantastic looking trout. 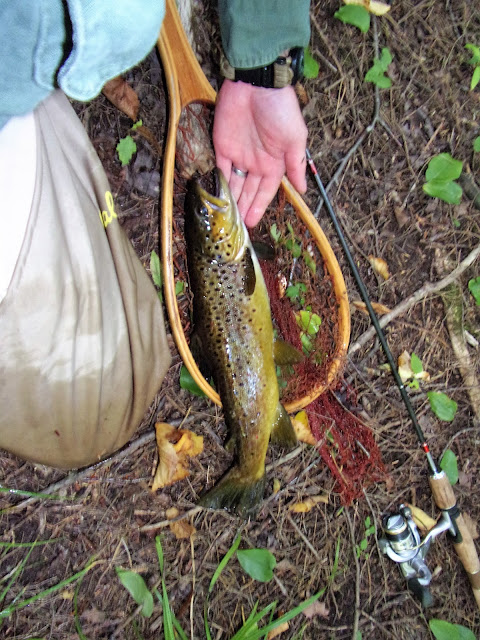 With two nice fish in the creel, It was time to head to the next hole. 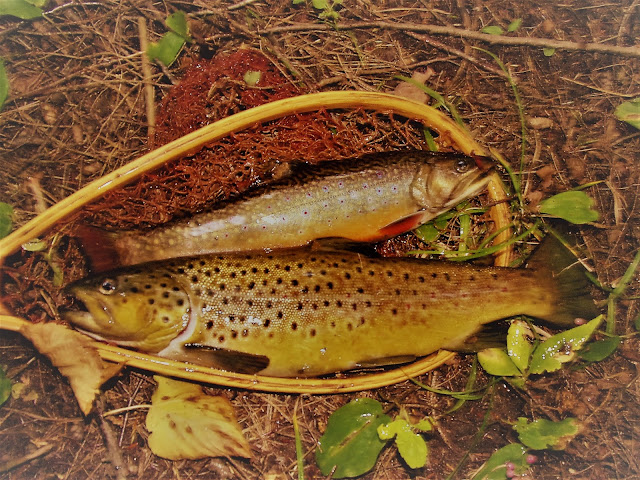 I took in the sights,sounds and smells of the woods as I hiked along. The weight of the creel jauntily swaying as I walked. 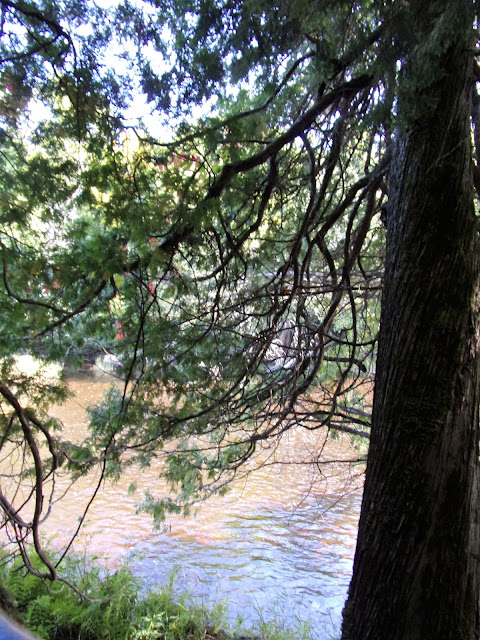 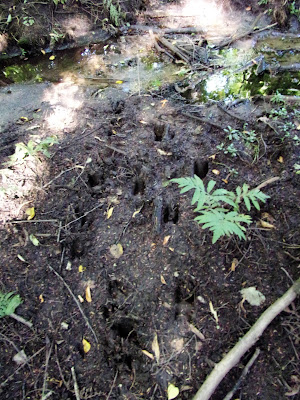 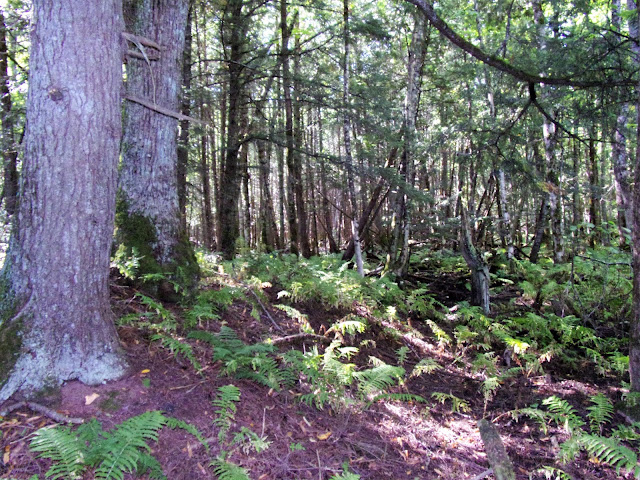 Upon arriving at my second destination I surveyed the water again and noticed some trout jumping and rising on the far side of the river. I waded in and got myself situated by a large rock and started casting. It didn't take long for a strike and after a short fight I had a small brookie in hand. I quickly unhooked it and released it back into it's copper colored, liquid world.

I resumed casting around the submerged boulders that were laying before me and was jolted by a savage hit. I set the hook and my reel screamed. This one had shoulders. I watched my line bounce in the sunlight as the fish bulldogged it's way around the rocks, trying to burrow it's self in some hidden recess that only it knew. As I tried to control the fish I watched as my line started to rise from the depths...it was going to jump. I started to time the lowering of my rod tip in time with the ascending line and watched as the fish broke the surface in it's bid for freedom. As the golden yellow hue of the brown trout breached, I was taken aback at how large the fish was, or I should say, wasn't.

It was a nice fish, but they way it was fighting belied it's size. I cleared it from the boulder field and it still had plenty of spunk so I played out in front my rock. I guided it along in a series of figure eights so I could attempt to net it with out it making too much fuss. After what felt like minutes, I landed my catch. A hefty female brown with nice golden yellow flanks. She was the shieldmaiden of her kind that day. 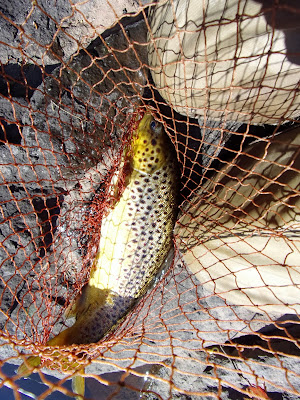 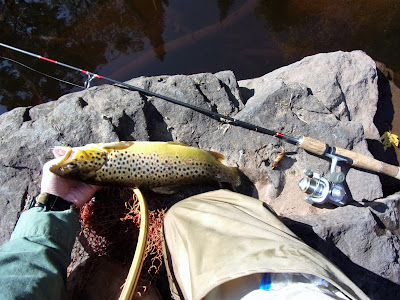 Elated to have taken three fine fish that afternoon, and with this one in the bag I was done keeping for the day. Here on out it would be catch and release.

I continued assaulting the hole and had a few follow ups and short strikes from some brookies in the 10 to 11 inch range. One of which literally swam circles around my lure but never touched it. With the action slowing down in this hole I moved off towards a set of rock strewn rapids to see what they had in store.

A few casts amongst the rocks coaxed out an eager little brown. I took some quick photos of it before letting it go. 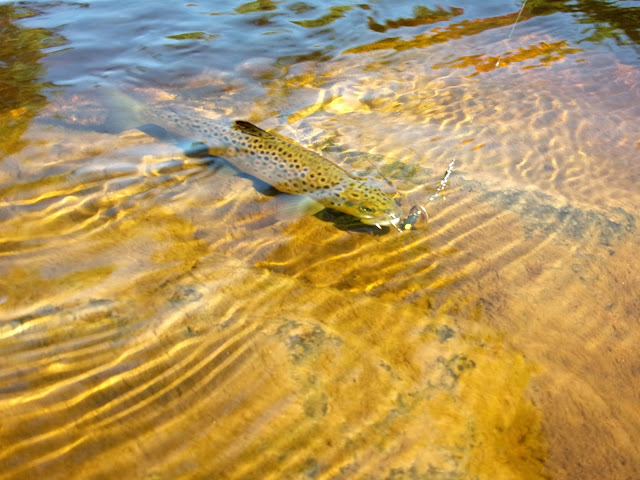 A subsequent retrieve through the same area evoked another hit and as I set the hook I felt and heard a resounding "SNAP!!" I thought I had broke my rod. For a second I was dumbfounded because nothing felt right in my hands. The reel, the rod, the balance of it all...it was all wrong. It took a moment for me to realize my reel just snapped right off of my fishing pole! I was flabbergasted. My brain quickly came back to reality and I remembered that I had tried to set the hook on a fish that might still be attached to my line. I desperately tried hand lining what line there was out there but soon realized there was no fish at the other end.

I crawled up the bank to inspect what just exactly had happened. I couldn't believe it. 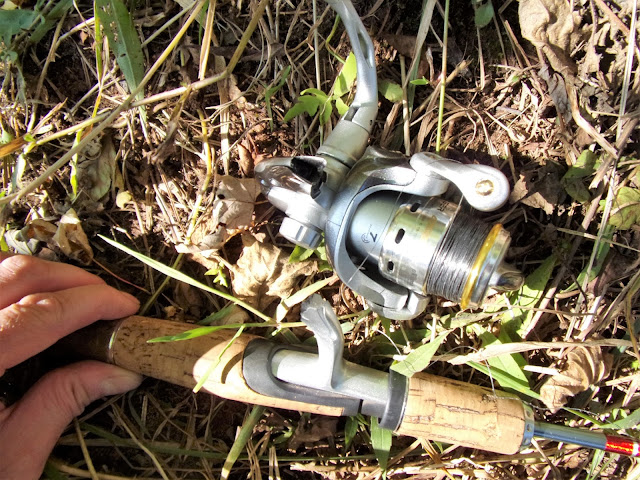 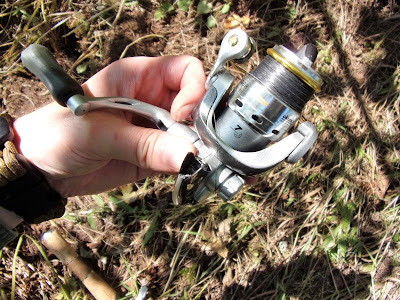 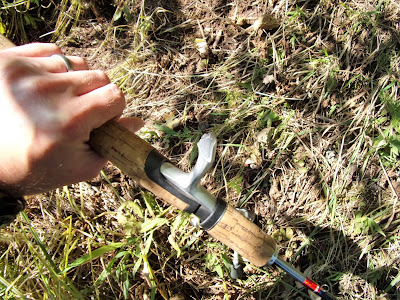 Closer inspection revealed a design flaw in the reel's shaft. The shaft that leads to the reel foot (where it attached to the rod) is very thin just above the actual reel and is sandwiched by a piece of plastic on each side of the reel. This outer layer of plastic that sandwiches the shaft serves no purpose that I can tell, other than being there for purely aesthetic purposes. This leaves the actual, functioning material of the shaft very thin at the most critical point of the the structure. To top it all off, it also has a screw that goes right through the middle of the thinned portion of the shaft, running from front to back, and that is exactly where the thing broke! This is a total engineering flaw in the design of this Okuma reel. I have had good experiences with this brand in the past but now I question the design staff's mentality and the failure of the engineers to realize this is a fatal flaw in the Avenger series of reels.

I took this very same reel, attached to a pack rod with me to New Zealand a few years ago and landed a nice rainbow with it. Thankfully it didn't fail me there. I plan on contacting Okuma's customer service to report my experience with this issue.

This year has been a tough one on my equipment. I had an Abu Garcia Cardinal reel fail on me earlier in the spring when I set the hook on a huge brook trout. Thank the fish gods I was able to land it. It ended up qualifying to be a Michigan Master Angler trout. The handle retaining cap on that reel snapped, causing the handle to just fall right out of the reel and fold up in it's self. I also broke a pole while camping this year. It's been years since I have broken a rod or a reel, but this year I've made up for it in spades.

With my day of fishing effectively over, it was now time to go gather some 'shrooms.


It was hard to be too dejected with about 5 pounds of fish in my creel. I decided to clean my catch in the woods and hike back to where I found the chanterelles earlier. 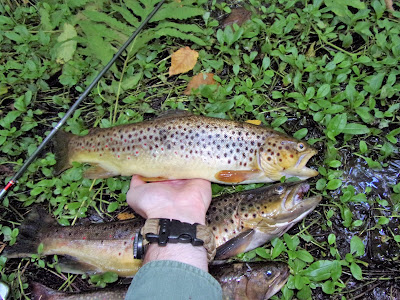 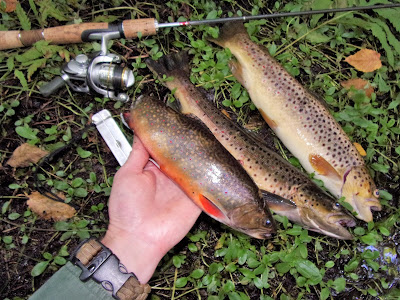 On this trip I took a knife that I had made a number of years ago using a Norwegian Helle' blade blank and a deer jawbone. It made for a cool combination. In case you were wondering...yes, it makes hot spots with heavy use, but I don't care. One might say the handle really "bites in" when you grip it. 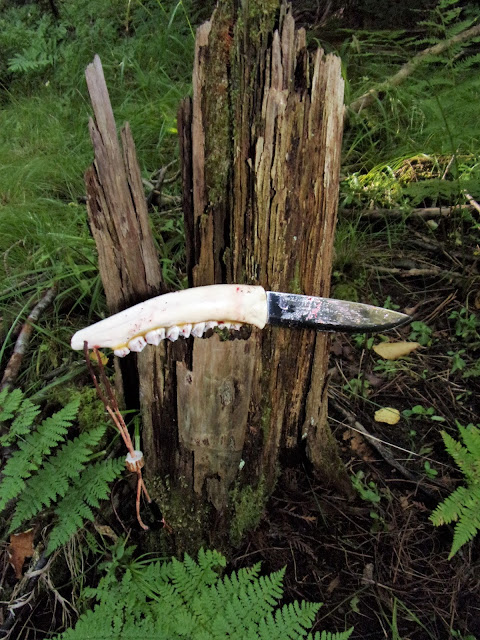 After packing my catch back up and washing my hands and knife off in a spring, I started the hike out. It was a nice a day to be in the field and I was enjoying every minute of it. The sting of the broken reel was fading with every step onto the forest floor. 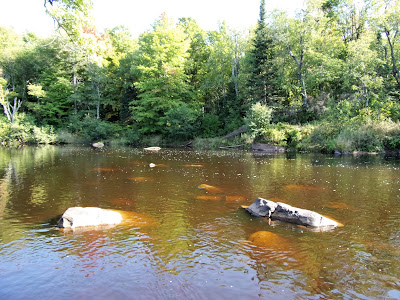 I reached the patch of chanterelles and starting picking. I've always enjoyed finding and gathering mushrooms. I find it rather relaxing. Not to mention the culinary rewards you get to reap later. 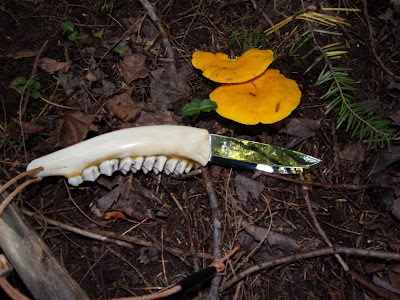 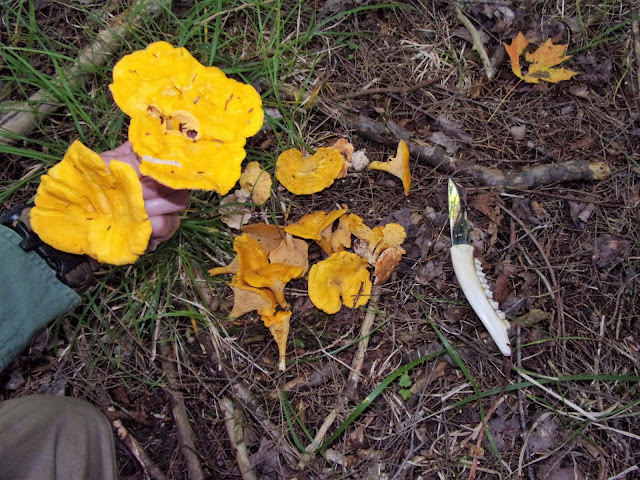 Besides the Chanterelles, I found my first batch of hedgehog mushrooms of the year (Hydnum repandum). It's also known as sweet tooth. It's a great mushroom to look for if you are a beginner because it has no poisonous look a likes. They always have a frumpy looking, uneven cap that's a light tanish brown in color and the gills look like spikes, hence it's common name. 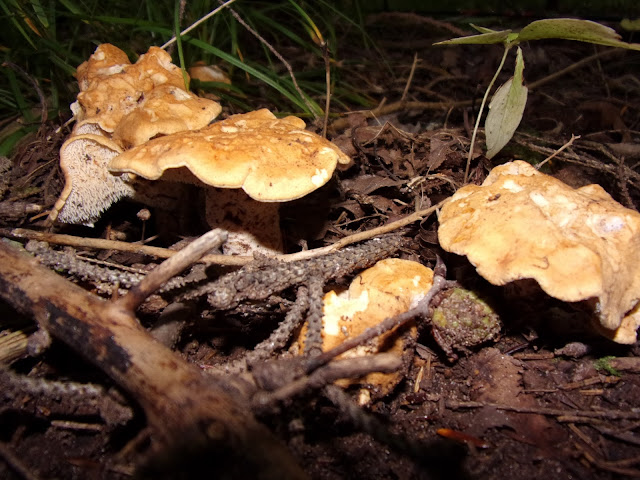 I found this large hedgehog specimen. 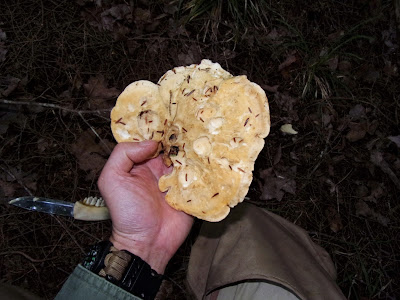 I wandered around a bit to see if I could find anymore mushrooms I was interested in and took a few photos as I finished the walk back out. 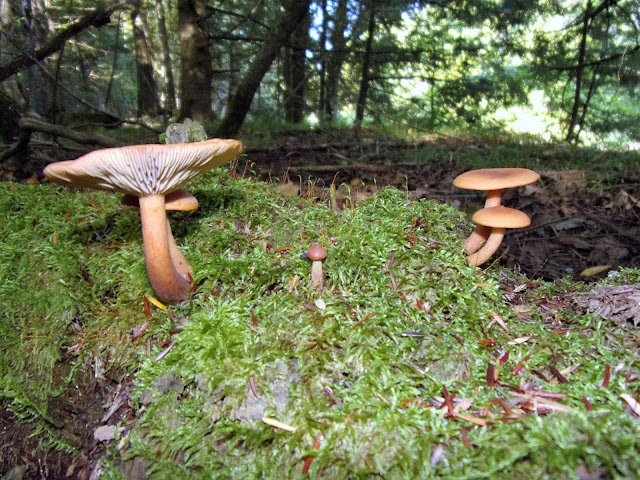 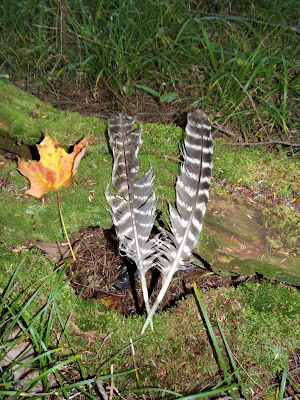 Soon it was time to leave and I thought about how this might be the last time I fish this stretch of water this year. It was good season that produced a lot nice fish and even greater memories. As the seasons reset and come full circle I will once again find myself standing along the water's edge next year, and the trout will be waiting. 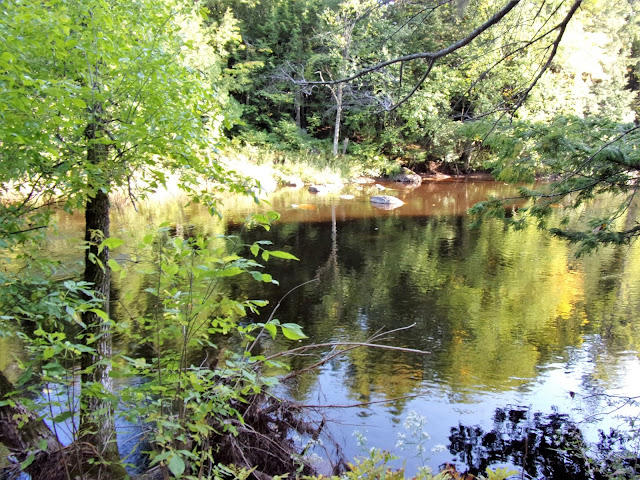