Brookie fishing along a snakey river.

I was able to get some free time during the Labor day holiday and headed out to do a little stream fishing. It was a mild day with temperatures in the 60's and I headed out to an area where I knew I might be able to tie into some trout for a meal along with the possibility of gathering some edible mushrooms. It was a one of those perfect fall afternoons, albeit a little breezy. I wasn't going to fish too long and had a few holes in mind that I wanted to try.

As I headed through the woods towards the stream I was surprised that the water level was so low. It had been raining almost every other day for days so I expected river conditions to be little high and the water to be somewhat turbid. However, it was low and clear.

Rounding a bend along the wood line, I spotted a flock of female common mergansers that had congregated on some rocks in the river. These are fish eating ducks and they are never a good sign when you see them hanging out on a stretch of water you intend to fish. In the fall they flock up in decent numbers and are one of the hindrances to successful autumn fishing outings on rivers and streams. I was hidden in the trees and they had not detected my presence so I was able to snap a few photos of them before I intentionally spooked them away. 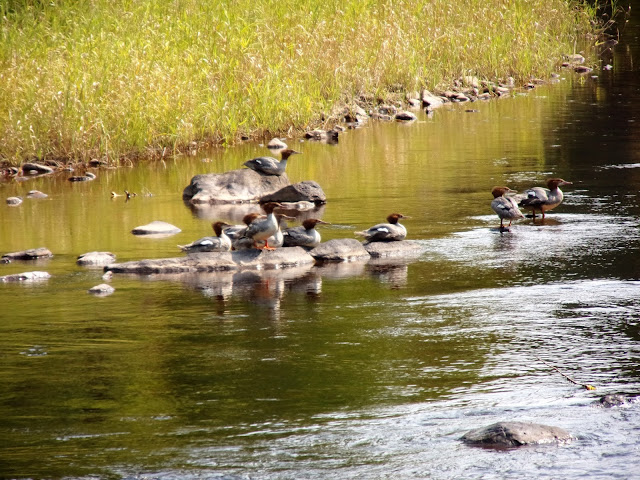 Not far from where flock took off  was a small stretch of deeper water with a few riffles that looked like it could hold a fish. I tossed a small spinner in to where I figured it would cross paths with a hungry brookie and with in a few turns of the reel I fell the sudden "rap" of a fish hitting. I set the hook and the fight was on. First cast and a fish. It seemed like it might be a great day in the making. The trout made a valiant fight and as I was reeling it in, I realized I had forgotten my landing net at home! I backed up and as the fish neared shore I slung it up into a grassy area behind me. Thankfully it was a smaller fish because there are times you just can't do that with a bruiser and expect to have a successful and happy ending. 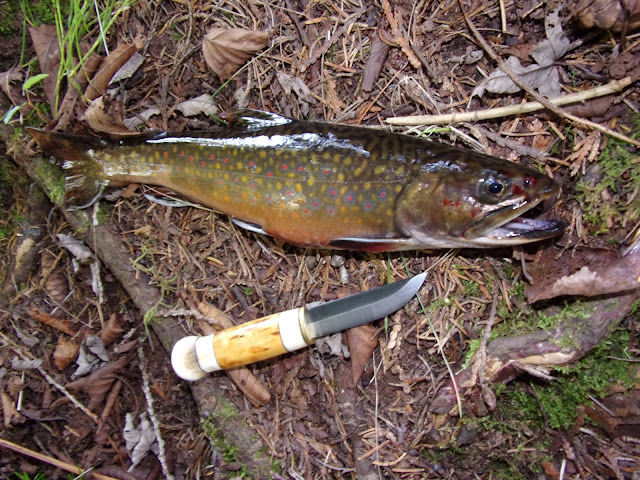 The brook trout was nicely colored and was starting to exhibit it's fall spawning colors. I happily added it to my creel and then I tried for another one in the same riffle but a little further down stream from where this fish hit. Almost as soon as the spinner hit the water a second trout hammered the lure. Two fish in two casts! It very well may end up being a good day indeed! I couldn't have asked for a better start for to this short term fishing trip. 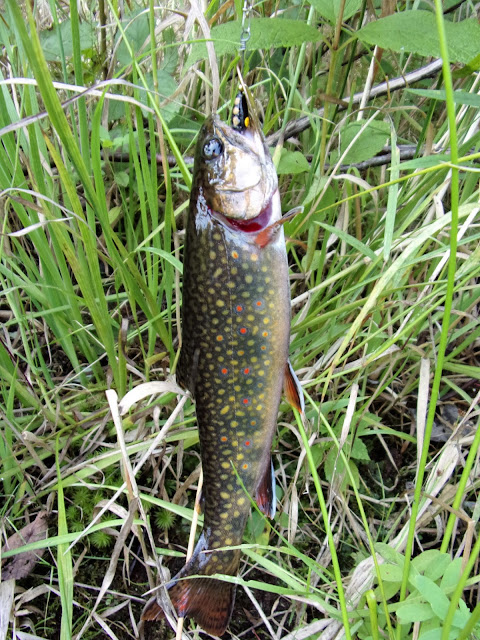 This one was a little smaller than the first brookie so I let it go. It had some beautiful and vivid markings. I'm always fascinated by their looks. Each fish's pattern and coloration, much like a fingerprint, is unique.

I pushed my luck and tried a few more casts in that riffle but wasn't able to evoke any more strikes so I moved on to the next spot I had in mind.

The next hole looked like it was deep enough to hold a few fish and I was hoping they were going to be just as accommodating to me as their down stream brethren were. My first cast produced a strike but no hook up. The same thing happened with the next few casts. I re-positioned and waited a bit before casting again. The slight change in the retrieve angle seemed to have had a positive effect because another solid hit led to a hook up for fish number three of the day. 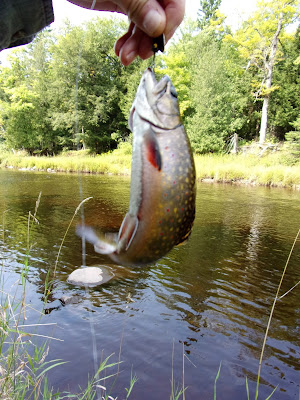 I let this one go too, and returned to assaulting the hole in hopes of something larger. A few retrieves later I had a decent one follow up but it wasn't interested. Changing the lures a few times didn't change that fish's mind in the least so I moved on to my next destination along the river. 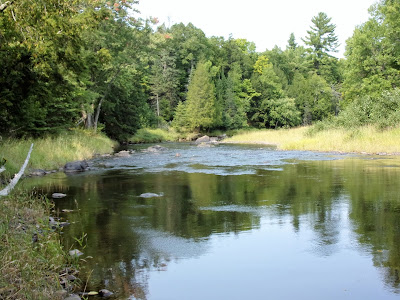 As I reached the hole that was to be my primary destination I was dismayed to find a large flock of about 20 mergansers hanging out all along it. I'm guessing the group I spooked off met up with another flock and they decided this hole was the place to be. The ducks scattered all over the place at the sight of me and went swimming through every eddy and riffle that held the prospect of a fish. I tried my best but the results were what I expected. Nothing. I moved on and fished a small rocky area above stream but that it yielded was a few follow up from very small fish. I expected as much considering how shallow the water was there, but it was still neat to the see the small trout dart out  like ghosts from parts unknown to investigate the lure. 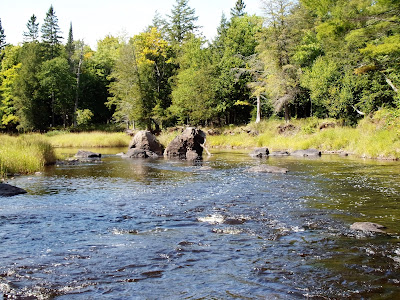 At this point I shifted away from fishing and began my hike out, I was hoping to come across some mushrooms that may be out after the frequent rainfalls we had recently experienced. 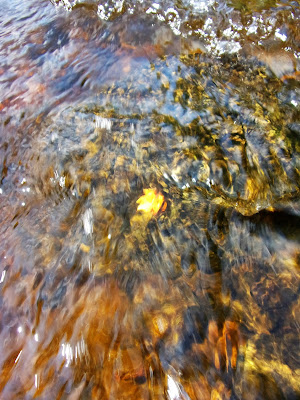 On this outing I carried my miniature puukko knife. It's a handy little Finnish made knife that just begs to be used on birds and trout. It's basically a scalpel that's handled in curly birch and reindeer antler. It's a fantastic little blade. Because I knew I'd be using this one around water a lot I applied 5 coats of Birchwood Casey Tru-Oil to the handle. This gun stock finish makes the birch impervious to water. I also polished a lot of paste wax into the antler portions. 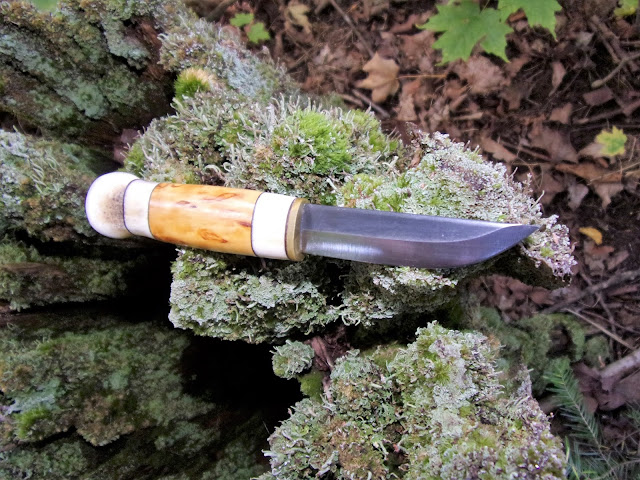 As I walked through the woods I kept scanning for mushrooms when I suddenly spotted a snake. It was a garter snake and large one at that. In fact, it was one of the largest ones I have ever seen and it was stretched out to at least 3 feet in length. I was close enough to it that I thought it was odd that it wasn't moving. Usually these snakes, like most snakes, are quite skittish and vacate as soon as they sense your presence. This thing looked like it was dead. I noticed a large bulge in it's midsection and figured it ended up dying from one of the 7 deadly sins, gluttony. Were it's eyes bigger than it's stomach? I thought for sure it had devoured some critter that was just too big for it's digestive tract to handle and a bad case of indigestion did the snake in. 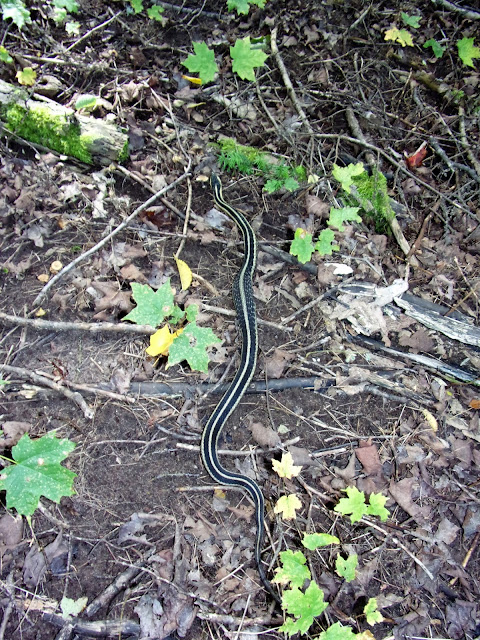 I walked around to the front of the snake to a close up photo and it still didn't move. Then suddenly it snapped out of it's presumed slumber and started going berserk! The only thing I can figure is the snake was literally in a food coma and was just trying to zone out while it digested it's meal. I then realized that the damn thing couldn't move due to the fact the bulge in it's mid section made it impossible for it to slither away. The snake just stood it's ground and aggressively struck out to ward off any threats. I had never seen this behavior in a garter snake before. Normally they are quite docile. 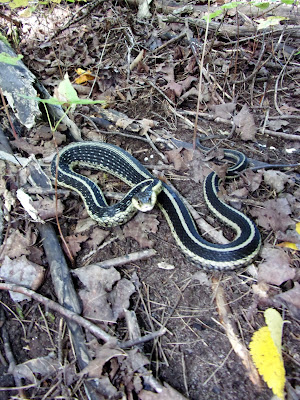 I shot some video footage of the serpent striking out at my camera lens.

Thankfully I never have to worry about encountering any venomous snakes where I live. We only have a few species of snake that reside up here and they are all small and not dangerous. I know what it's like to be paranoid in snake country, and it's not fun. I lived in Australia for a while and averaged one deadly snake encounter per every month I was there. One king brown snake even slithered into a shower stall while I was taking a shower in it! That's one thing that I don't miss about living in Oz. That's a story for another day though.

After I was done harassing the snake I wandered off to go back in search of mushrooms. I found a couple of interesting specimens. 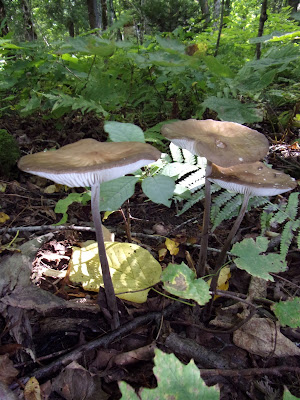 I also came across this strange growing tree. I have heard stories and photos of trees that looked like this. Long ago, The Indians would purposely manipulate a tree's growth to look like this and it then acted as a long term trail marker or directional sign. This crooked growth seems too high to be such a marker from the past, but you never know. 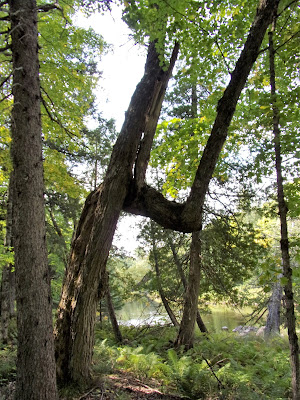 Still not having any luck finding the mushrooms I was looking for, I decided to clean my catch down by the river. I always like to check the stomach contents of the fish I catch just so I know what they were feeding on, This one's belly was as empty as my mushroom bag. No wonder it hammered that lure as soon as it hit the water. 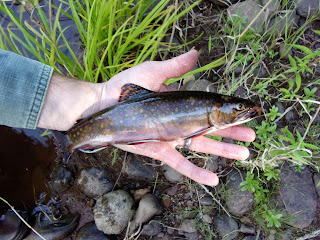 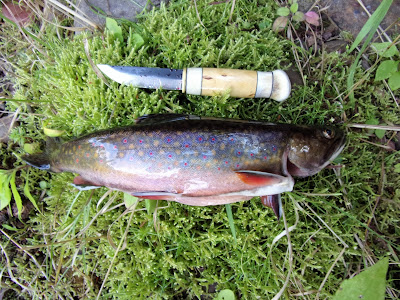 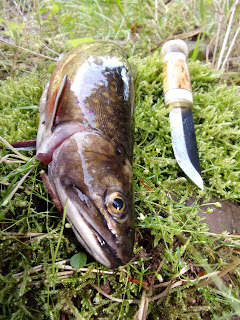 I washed my hands in the river, packed up my fishing gear that was scattered about and continued my walk back through the forest. It was then that I finally stumbled upon the gold I was seeking... 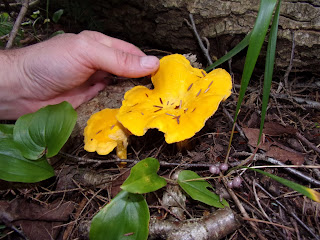 I finally found what I was hoping to come across. It's a choice mushroom and it will be great to add with a meal of a fresh caught trout. There was small number of them in perfect condition. I got busy harvesting my bounty. 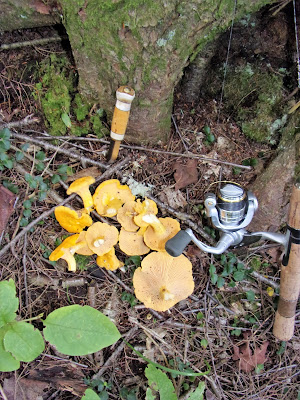 All in all it was a great early fall day to be out in nature. I caught some fish, found some wild edibles and just enjoyed some great scenery, wildlife and fresh air. Little jaunts like this help to refresh my soul and make me appreciate the world that I live in. I'm also thankful for the great opportunities I have to spend time in a land that can afford me such experiences. 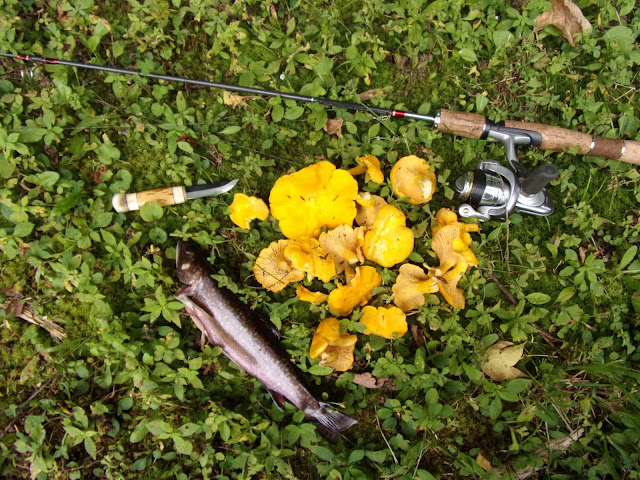 Thanks for taking the time to look!