Winter comes early and stays late in my land. If a person doesn't partake in wintertime activities up here they may get stir crazy waiting for "spring" to arrive during this time of year.

A couple of weekends ago my uncle called me up and asked if I wanted to go and try for some burbot fishing the deep water offshore on Lake Superior with him and some of his friends. Burbot (Lota lota) go by many names, eelpout, lawyer and lingcod are just a few of the aliases that this primitive fish goes by. They are the only cod-like fish that can be found in freshwater and their flesh has been likened to that of a "poor man's lobster" when it comes to its quality as table fare. I have never fished for them so I welcomed the experience.

The evening before my fishing trip I made sure I had enough line on my tip-ups. My tip-ups were primarily set up for northern pike and walleye so I needed to make sure I had lots line to get the bait down to 50 plus feet of water and to be able to have extra to play out after a fish takes the bait. I packed up my gear and a few snacks. Then it was off to before dawn to reach the "big pond" by day break. 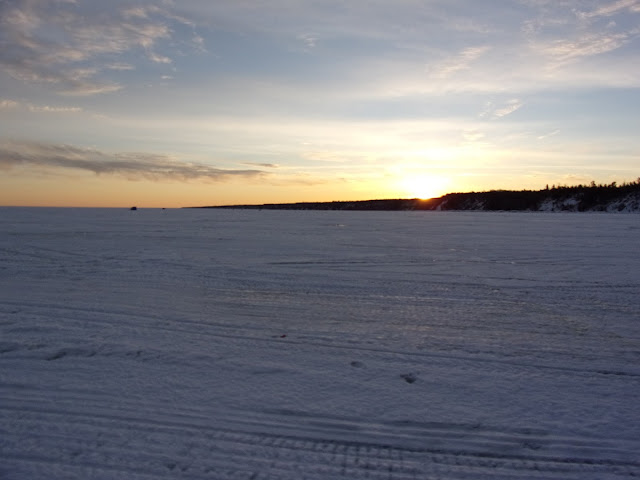 We got to the lake just at sunrise and headed out a via snowmobile. We would be a couple of miles out on the ice. 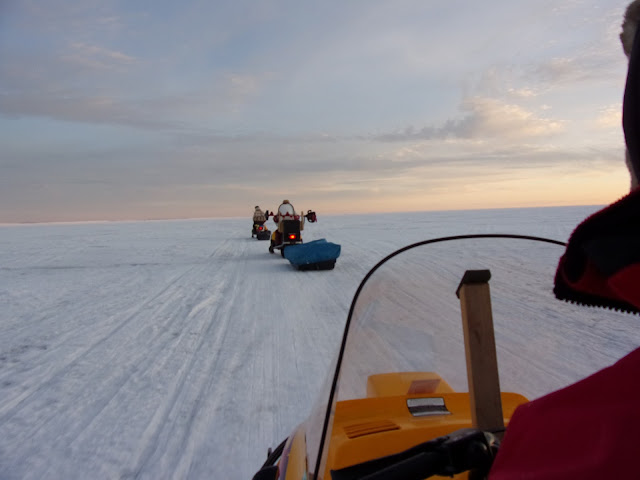 I love being out on Lake Superior in the winter. Being out on the ice makes me feel like I'm somewhere in the Arctic or some kind of exoic adventure. The ice, like the lake, has many moods. Sometimes there is a lot of pack ice which piles up and makes huge impassable formations. This year in the area the ice stayed as a nice, relatively flat sheet that spanned for miles and miles. The ride out was easy. 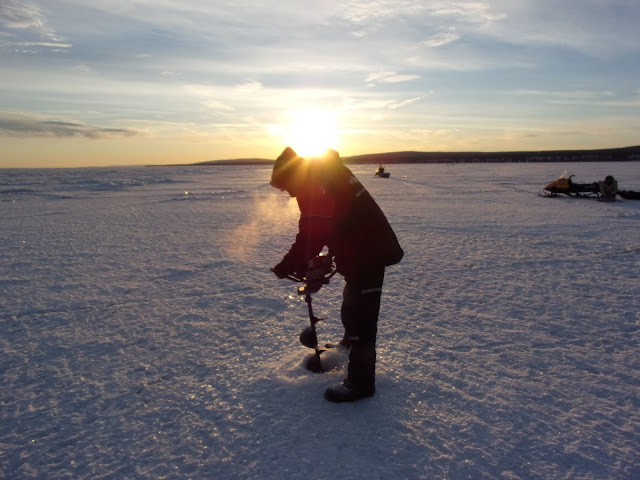 We reached the first area we wanted to fish and set up shop. We drilled a number of holes with the ice auger and noticed the ice was still about 18" thick. Plenty of ice for safe travel. Onc the holes were all drilled we set up 2 tip-ups each and used our 3rd hole for jigging. We used recycled smelt for bait. By recycled, I mean they were smelt taken from the belly's of previously caught lake trout. The lines were baited and I spooled my rig out making sure my baited hooks stayed only a foot or so off the bottom.

Next, I set up my jigging pole with a hefty jigging spoon and began pounding it off the bottom. I would work the spoon with erratic movements and would jig it about 10 feet up in various intervals and then I would work it back down to the lake bottom. My hopes were that I could draw the attention of not only some burbot off the bottom, but also the resident lake trout that were cruising around just above it. It didn't take long for the first member of our party to hook into a lake trout. 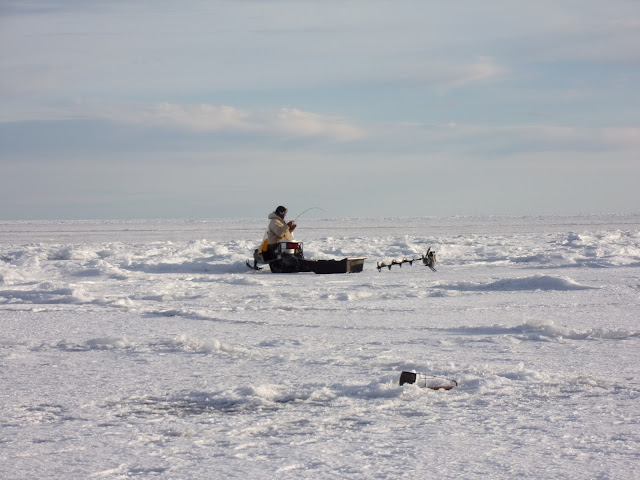 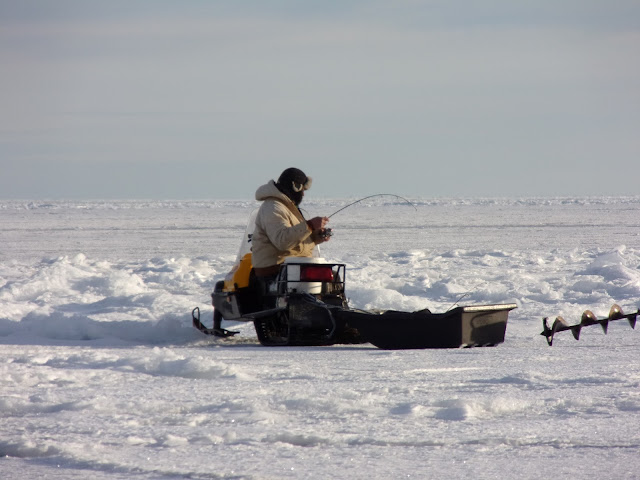 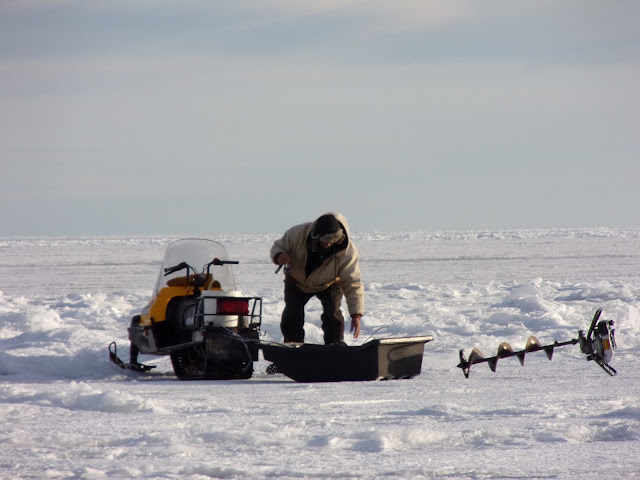 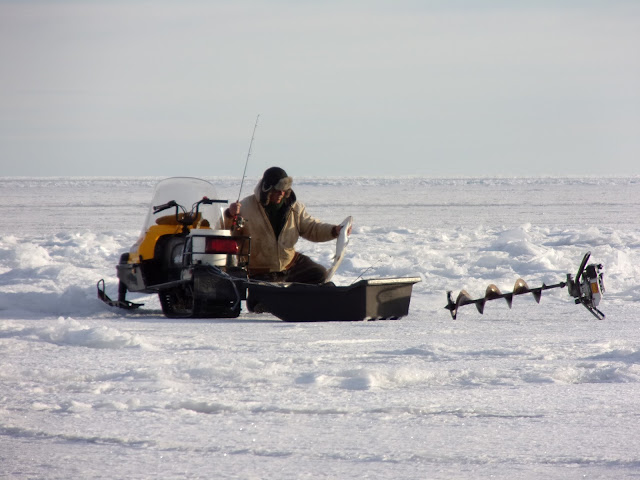 Not long after, my uncle hooked into a burbot while jigging. He fought the eel like fish to the hole and landed it onto the ice. 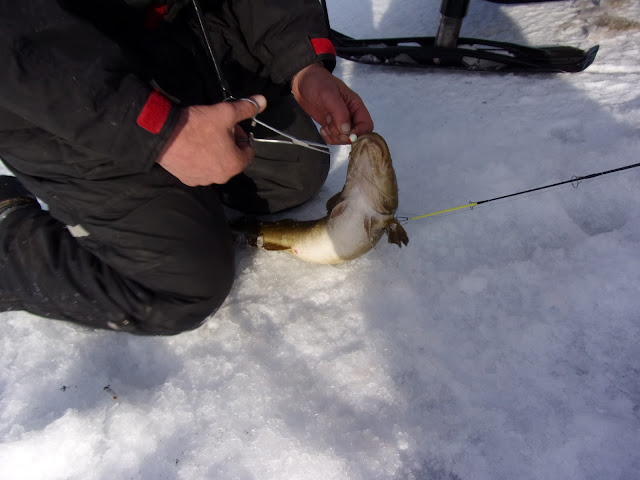 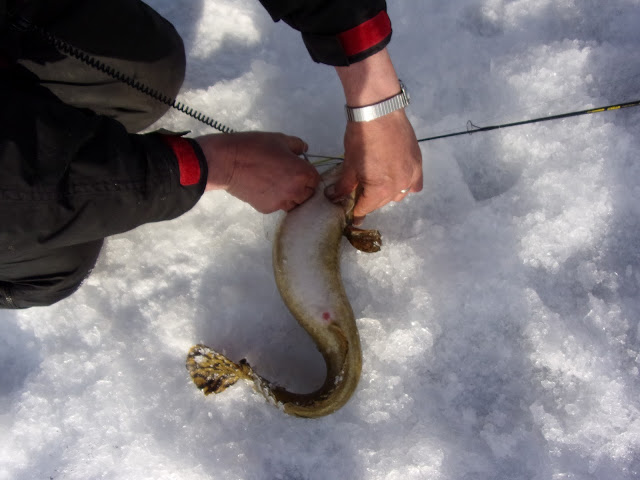 The eel like fish squirmed around as it was being unhooked. 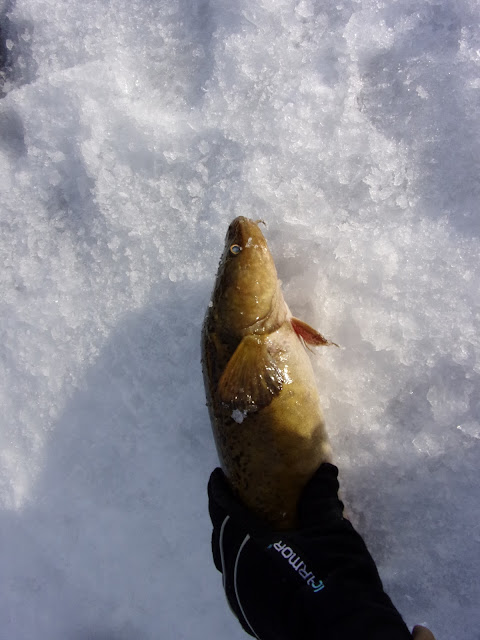 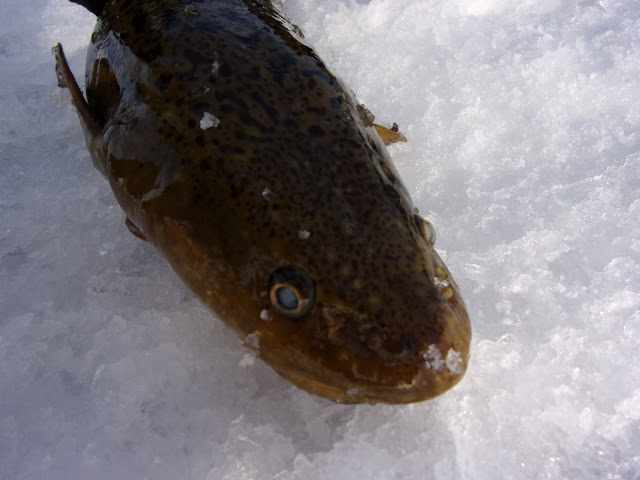 I investigated this fish that I have never seen before. 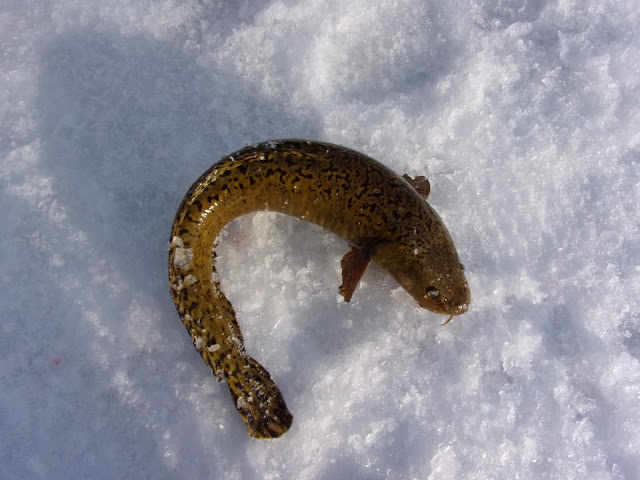 A while later and the action slowed. The other people from our party started to focus more on lake trout and they moved further out into water that was deeper yet. Soon after they headed out, I noticed the flag up on my uncle's tip-up was triggered and after a decent tug-o-war, I gaffed the fish for him. We now had two of these prehistoric looking fish on the ice. 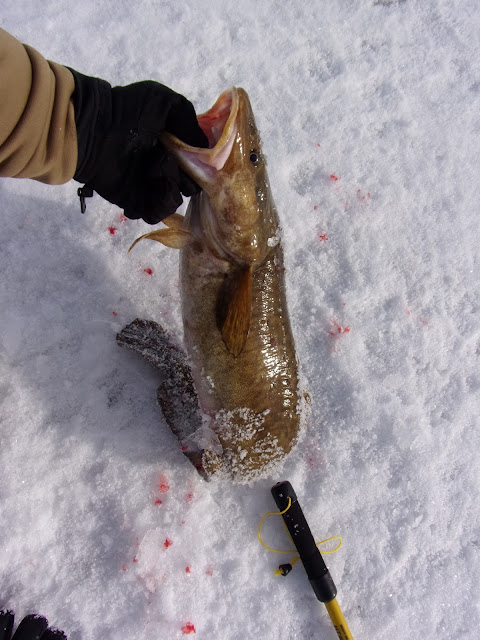 This was a larger specimen that what was previously caught and was quite portly. I couldn't stop marveing at their odd appearance. It's neat to see new creatures, especially when you can do it as a hands on experience and this fish was no exception. 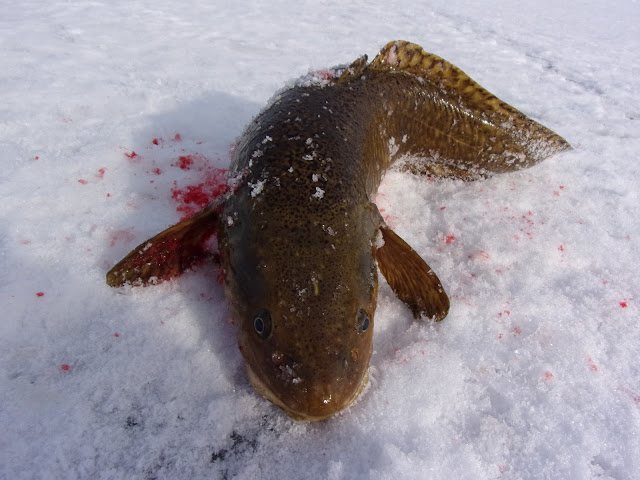 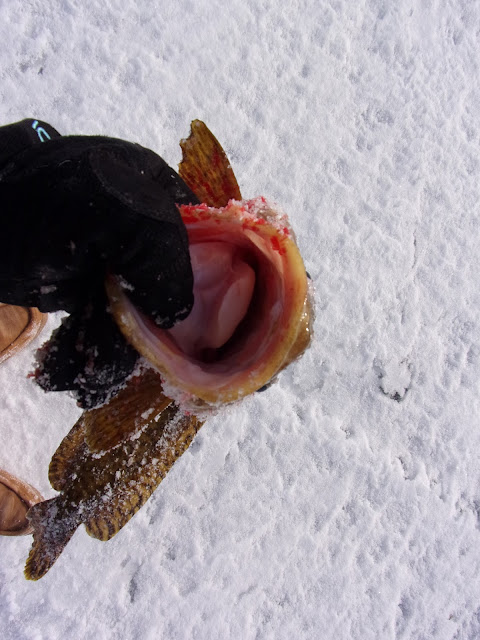 They have a toothless mouth and a very large tongue. They must inhale their scavenged food and prey items much like a bass. 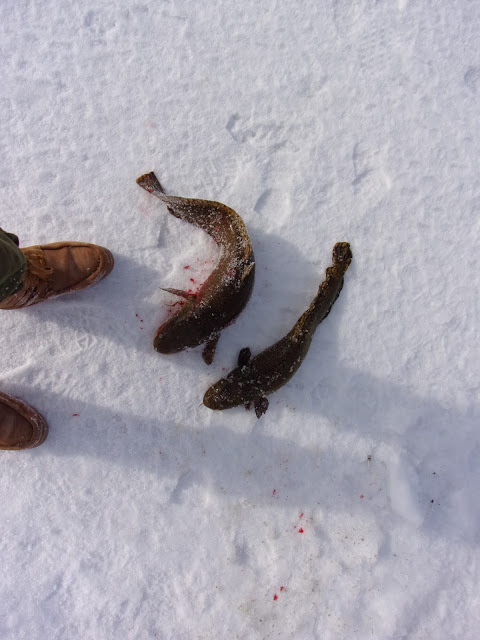 By this time I took a short break in the action to check out an old, froze over pressure crack. These rifts zigzag for miles. 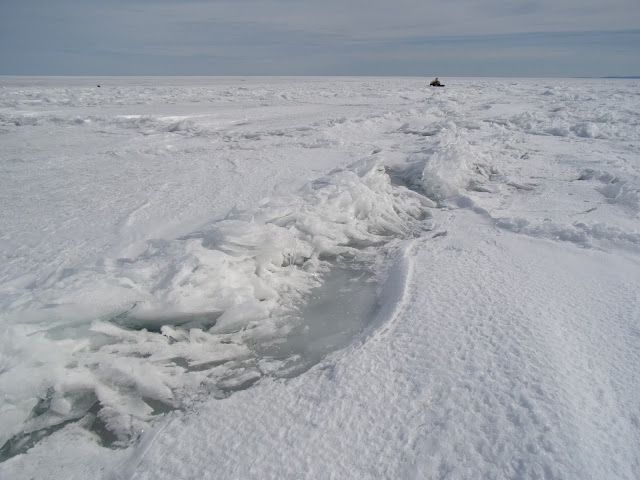 I had been jigging for over an hour and had a few hits and I lost one fish that I fought for about 30 seconds before it became unhooked. I was starting to zone out and was jigging in zombie like meditative state when I finally had solid hit off the bottom! Fish on!

It only took about a thousand jigging motions to hook one and I didn't want to loose it, The fish fought surprisingly hard for an eel like bottom feeder and my jigging pole bent and bobbed with the strain. After a couple of minutes of bringing the fish up from almost 60 feet of water, my uncle was able to get a gaff into it. 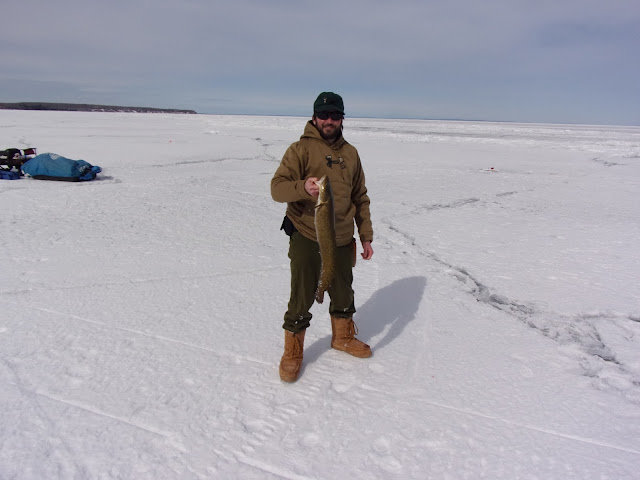 At last I had a new ichthian species under my belt! It felt good to get that monkey off my back and finally get a fish on the ice. 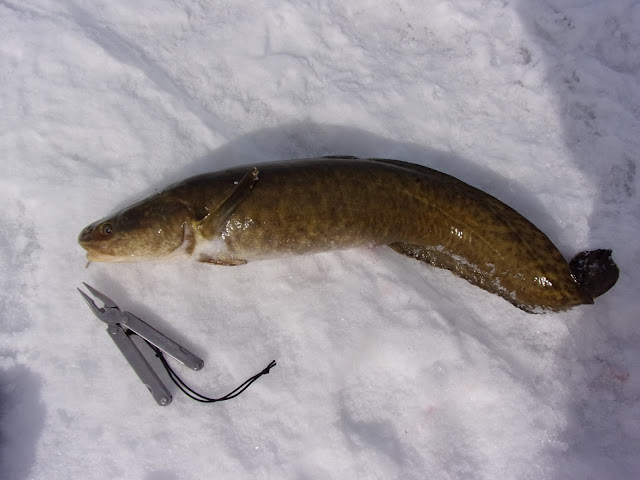 After this fish was on the ice, we packed our gear up and headed further out to meet back up with the rest of our group. They were further out near the edge of the old ice. The old and new ice shelves are separated from each other by a narrow gap. When the shelves move they bump and grind into each making the ice rifts. This is a dangerous area to fish. If the wind switches and happens to blow from the south, the whole ice sheet can quickly separate and start drifting off towards Canada. About 7 years ago a rouge wave hit a much thinner ice sheet in this same spot. The wave shattered the sheet and marooned a number of fisherman who were instantly trapped on a series of rapidly forming ice flows of varying sizes. These flows started to drift into the open water and local search and rescue were called into retrieve the hapless fishermen. Everyone was rescued but a few men lost their ATVs and other gear. A sacrifice to the lake in exchange for their lives, so to say.

Needless to say, I stayed on the south side of the giant open crack. 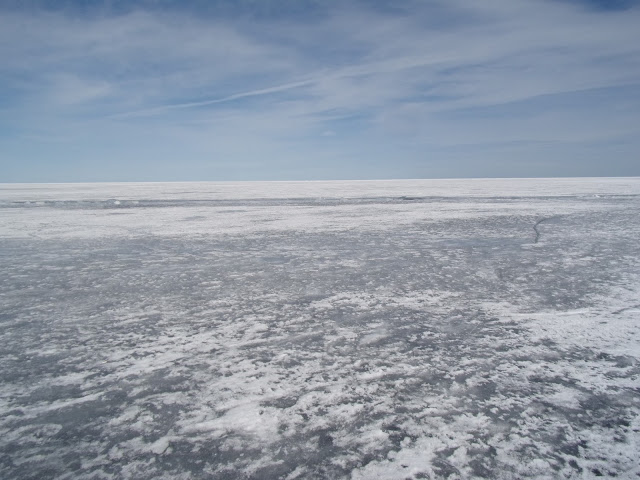 Seagulls had finally started to return and they were hanging around the only ribbon of open they could find in the area, which was the crack. It was my first sign of spring this year. I also seen a few greater Canadian geese fly along the crevasse too. 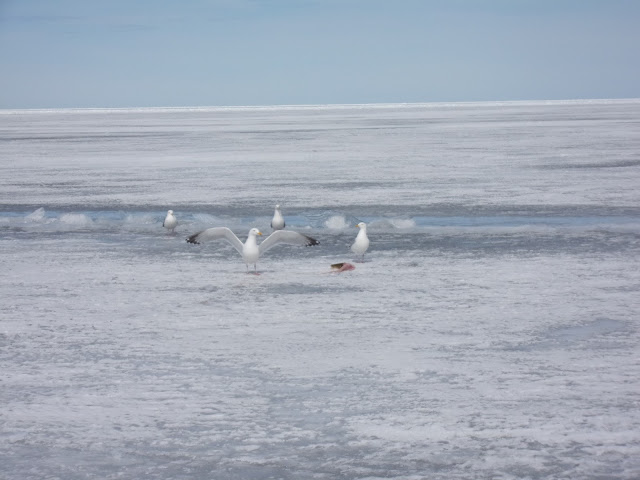 The seagulls eagerly awaited any handouts from the human intruders that were upon the ice. You can see the separation of ice behind them. 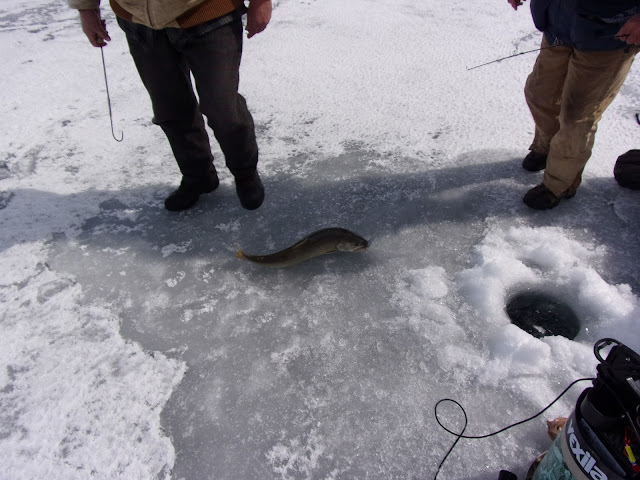 A few more lake trout were caught along with a nice sized whitefish. 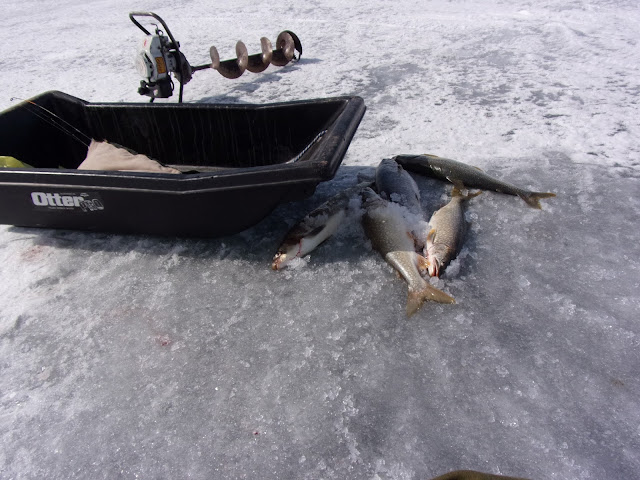 The ice out here was about 10" thick. Still plenty safe to walk on. 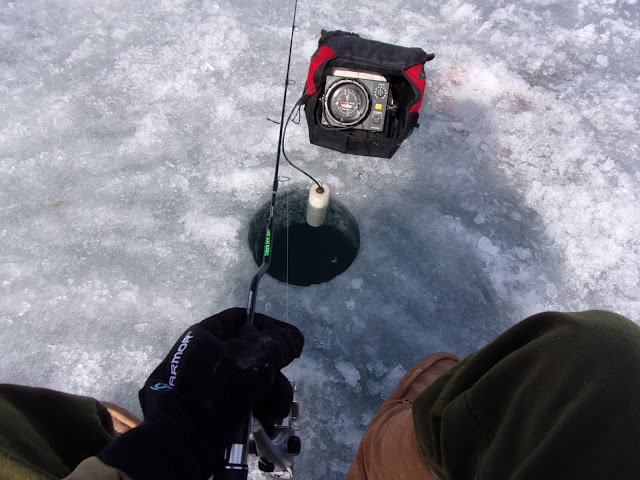 I had one Lake trout hit and it was hooked for only a moment before it got off. I'm guessing it was a body strike because there was a number of trout scales impaled onto the hook of my jigging spoon.

That hit was the last of my fishing action. We cleaned the burbot and packed up the other fish, and gathered our gear. 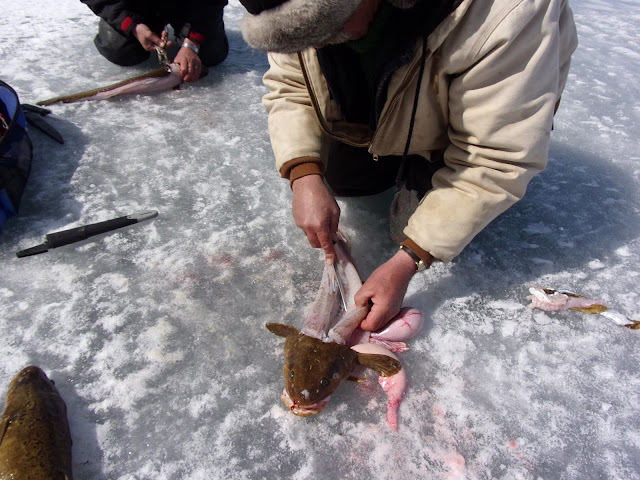 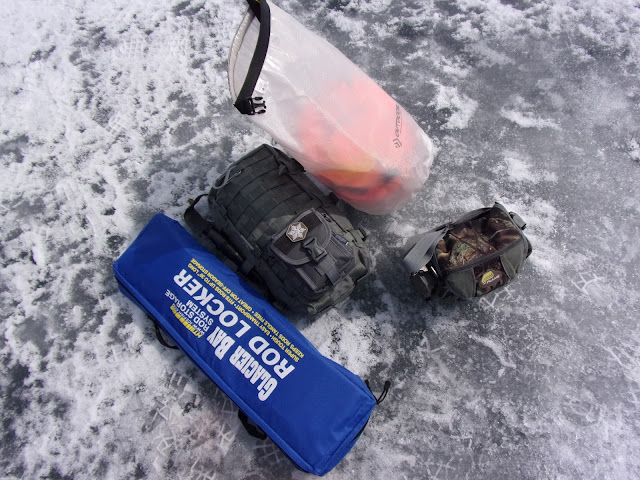 My equipment load out for the day

With everything packed up, we got back on the sleds and headed for shore. It was great to be out on the the lake's ice and it's always an experience to be remembered even if a person doesn't catch a fish . Catching a new fish species just made the day that much more special to me and I look forward to catching more of these unsightly, but delicious fish in the future. 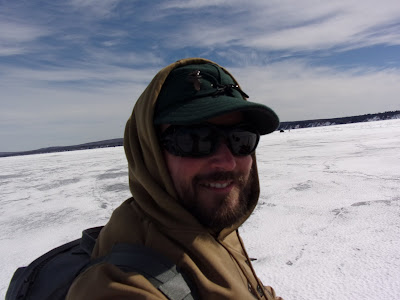