It was around -20 F when I rolled out of bed this morning and It's been sub zero for for the past few days. I hadn't done anything outdoors since I was on my holiday break and I wanted to head out into the woods to hunt some snowshoe hares and scout for coyote sign. 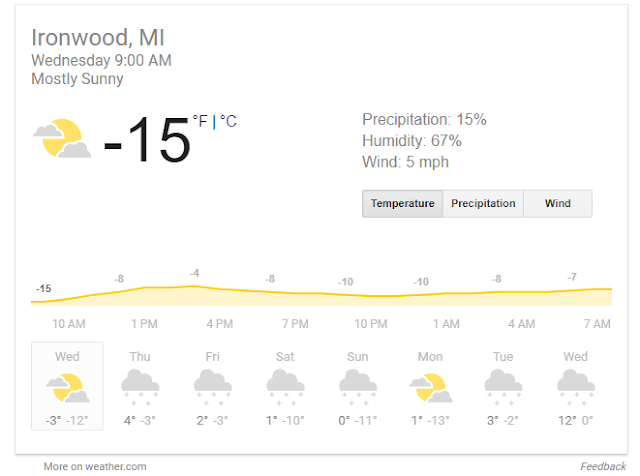 The other day I was visiting my grandmother who is in her mid 80's. She lives alone and still does all her own chores around the farm house. Just before I had stopped by her house, she was trying to start a space heater in the barn after getting her horse in and feeding the chickens. She hauls out two 5 gallon buckets of water every evening for the horse. She did all that in -18 temperatures last night. So today, on my jaunt I decided to wear my late grandfather's Ojibwe style snowshoes that I had inherited in honor of the tough and tenacious resilience of that generation. 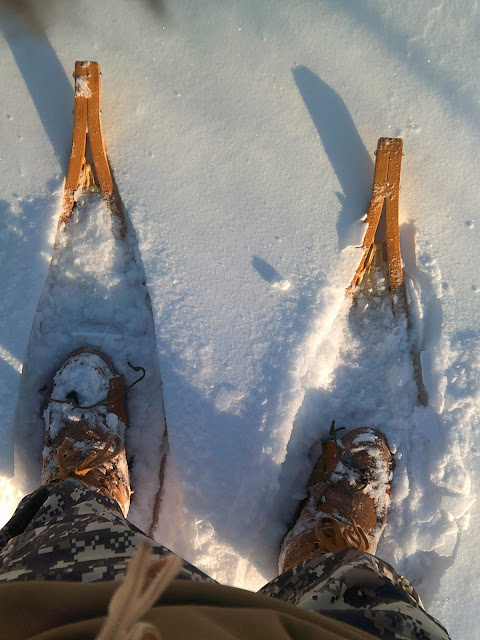 Where I live, we average around 200 inches of snow a year and if you want to get around on foot in the winter woods you need snowshoes. I own multiple pairs. In early winter I prefer these smaller Ojibwe shoes because they give me adequate float plus they are easy to snake through brush and other obstacles that aren't burred under 3 feet of snow as of yet.

Subzero weather is nothing to take lightly. If you are not properly prepared to go out in it, you can literally loose life and limb if you end up in an accident or neglect properly dressing for the conditions. I consider temperatures in the -30 F range and colder to be in the danger zone of operation. Personally I can function fine in -20 and above with little change in my gear and clothing set up if I'm going to be mobile. Being sedentary is another matter. Today is a day of mobility.

For foot wear I wore my modified mukluks. Ultra light in weight, they offer up a package of foot warming efficiency that pound for pound cant be beat. For my legs I had a set of grid fleece compression bottoms under a pair of fleece lined soft shell pants. On my upper body I wore a merino wool/polyester mix top. this lightweight layer wicks sweat well plus it has superb insulation properties. Over that I wore a Stormy Kromer Woolover which is a wool blend pullover that had lots of loft. This is a great breathable layer that can trap lots of heat. Over that I wore an Under Armor Storm hooded sweatshirt which has a brushed, fleece lining and has a water repellent finish. This was a gift I was field testing and I used it as an outer layer much like an anorak. For gloves I used a combination a fur "chopper" mitt and a well insulated finger glove that was a also a gift I was testing out. I wear the glove on my shooting hand and the chopper on my support hand. For my head I wore a leather and rabbit fur bomber hat. The warmest hat I have ever worn. This hat is too warm to wear when you are moving unless it's around -20 F or colder.

I Started out slowly and tried to judge how fast I could move without over heating. I did not want to get too sweated up in these temperatures. Once I figured out what my pace should be, I headed off across a marshy field to get to the wood line on the other side.

Almost immediately I came across some fresh coyote sign. There was one that loped around the edge of the wood line some time in the last 8 hours or so, I estimated. 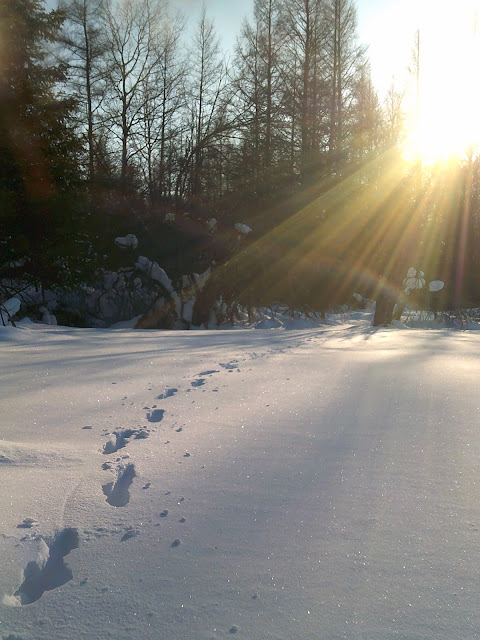 After navigating through the tangle of tag alders I started meandering around in hopes of seeing a snowshoe hare hunkered down in some cover. There was more snow on the trees than I had anticipated and this makes for poor rabbit hunting conditions due to the lack of visibility. 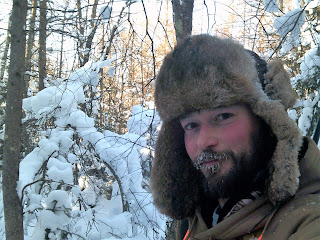 Coyote sign was quite abundant throughout these woods. In the near future I will set up near here to see if I can call in some of these crafty predators. 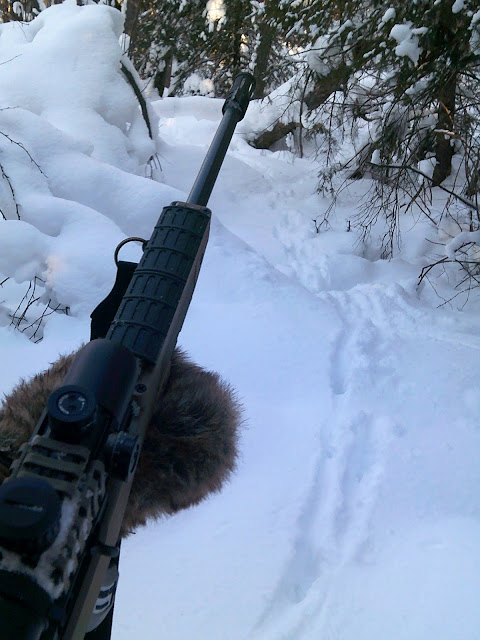 I also encountered some sign that showed a porcupine has been in the area. It had started to girdle some trees. 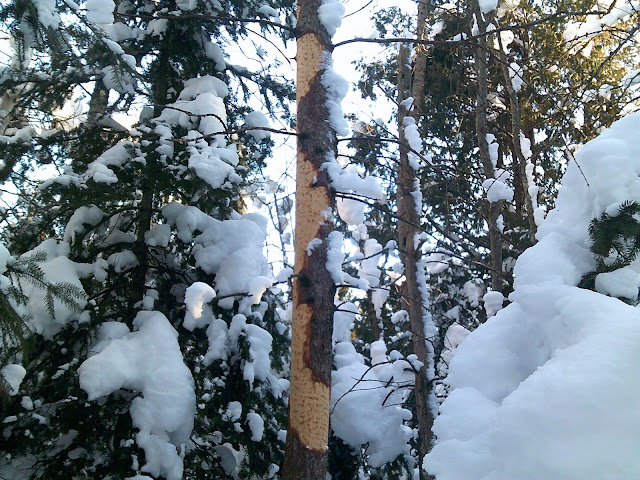 I took my time milling about and keeping a watchful eye out for any hares, but I seen nothing. The rabbit sign was mediocre and seemed to be concentrated in only a few pockets. Along with almost all the other game animals the rabbit and hare populations had crashed hard over the past 4 years. They too are just starting to come back in numbers now. I have a theory that they were wiped out by a virus or some other disease.

Everything that I enjoy hunting has died off in my region. It makes me sad to see areas that were once flush with game are now almost devoid of any sign of  animal life. Thankfully, many of these species are starting to now make a comeback. The oddest part is that all of them died off at the same time, for about the same span of time. Apparently a combination of many "perfect storms" took place and contributed to this multi species, mini near extinction event. Needless to say, hunting has been hard for the past 5 years. Coyotes seem to be the only animals that remained unaffected and I attribute this to the fact that they are highly adaptable survivors.

I proceeded to an area where I always encounter rabbits and found that I wasn't the only one who knew this spot would yield a chance for a kill. I noticed an area that was all tracked up and seen signs that a struggle had recently took place. I love reading sign in the snow. It's surface becomes a semi permanent reminder of what events took place. The observant passerby can often read the tales of exciting happenstances that have unfolded upon it's white crystalline pages. This story was that of a lucky coyote who had some how snatched a hare. You could see that the wild dog had shook it's prey because tufts of rabbit fur were lying on some low hanging branches. 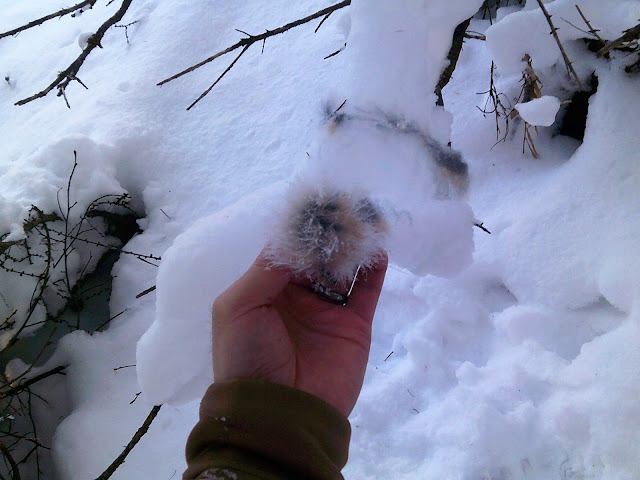 I roamed around some areas of great "rabbitat" as I call them but seen no game. The heavy snow cover on the trees made it nearly impossible to see anything that may have been jumped by my presence. My only hope was seeing a hare that would choose to play it's hand at trusting in it's camouflage by sitting still in hopes that I would pass it by. 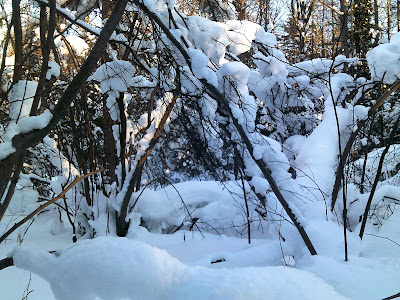 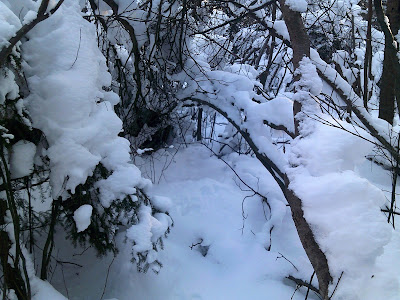 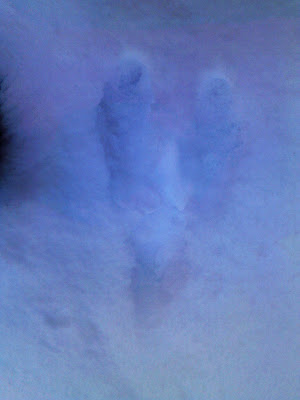 The kill site was an interesting find but I figured the small game had been harassed enough in this section of woods so I started off back across the open marsh to scout out another wooded area on the opposite side. I've had good success there in the past. 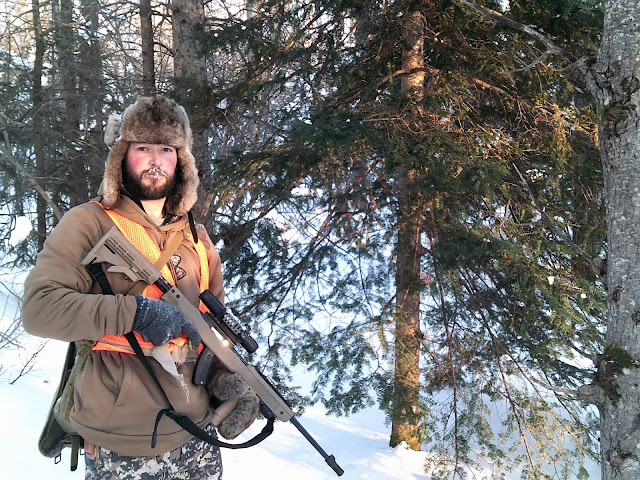 The hooded Under Armor top was working well for me. It proved to be warm, breathable and quiet. I know it's not intended to be an outer layer in frigid conditions like this, but it fulfills the roll of anorak nicely for my use of it. It's a superb gift.

Now off across the marshy opening... 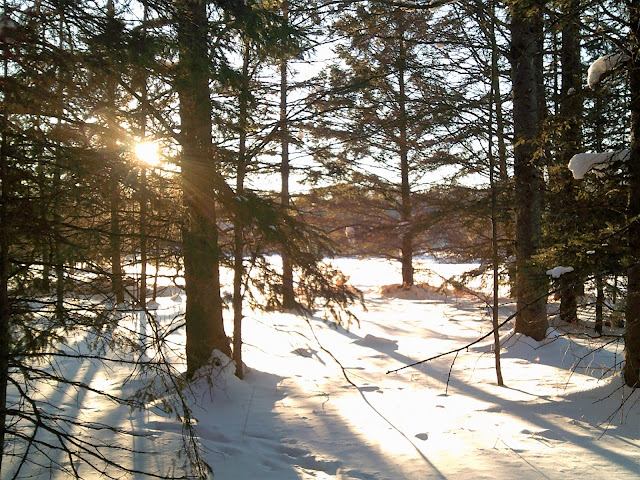 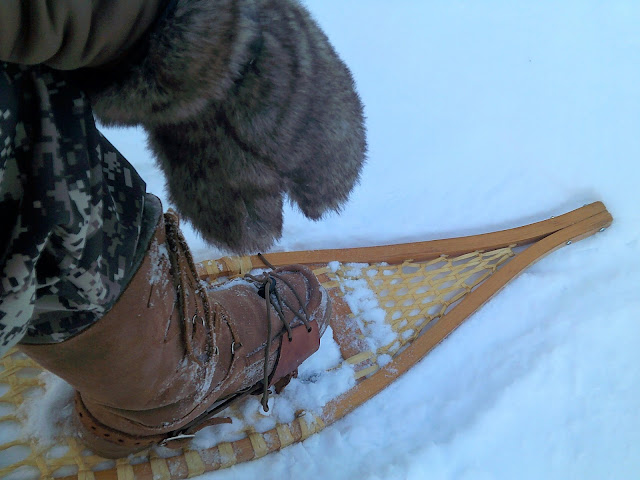 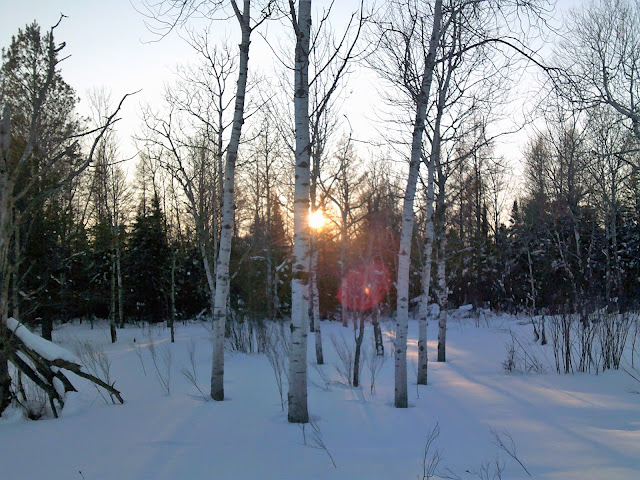 As I reached the opposite wooded edge, I noticed I had about one hand of sun left in the sky before I should start the trek back home. The temperature was dropping and I could feel difference, for now I could move more rapidly without over heating.


A large critter had passed through here...Possibly a wolf? It was hard to tell in the deep snow but the creature's post hole left a sizable imprint at the bottom. The track is about 2 feet down from the surface. 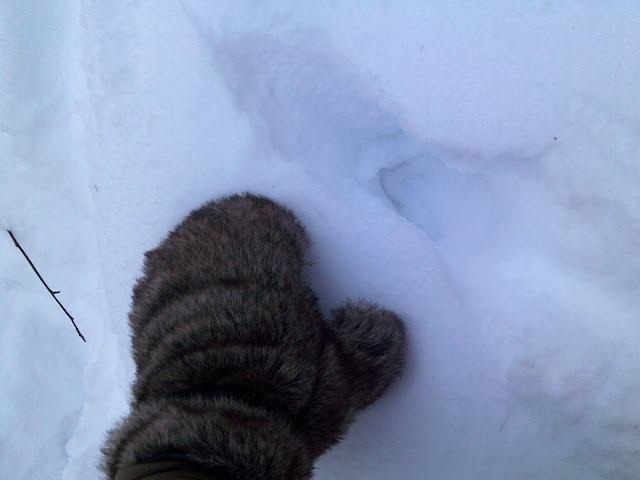 I roamed all over that wooded and encountered much deer sign (probably why a wolf was there), flushed some grouse but couldn't get a shot from a still bird, and there was also plenty of the ubiquitous coyote sign as well.

There were a number of rabbits runs and I did jump this hare but I never seen it. I tracked into an almost impenetrable tag alder tangle and I gave up the chase for another day. The sun was now fading fast and it was getting to be time to start heading out. 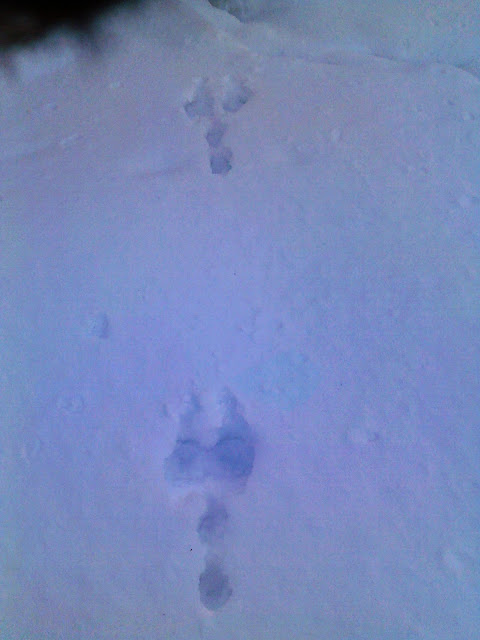 Once again I struck out on taking any game but there was plenty of sign that should be indicative of some good coyote hunting. Sooner or later the cards will be once again in my favor.

It was just great to be out in the midst of this frozen world. Many people choose to stay indoors when winter hits and and very few venture out when weather like these sub zero temperatures descend, but I'm not the kind of person who lets weather keep me from enjoying the great outdoors. With proper clothing and knowing one's limits you can safely enjoy time in a realm few people are willing to experience. 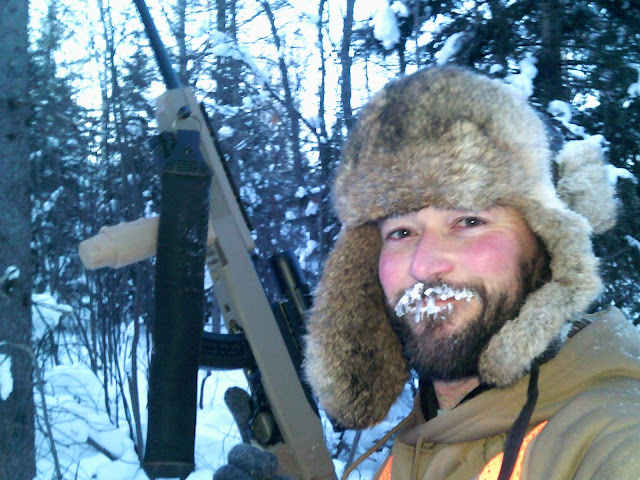 I hope you have a safe, prosperous and happy New Year!