After a slow few days in Michigan, I headed off to hunt the first few days of the Wisconsin firearms deer season. 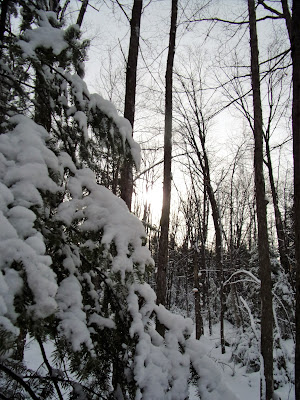 The morning of November 18th found me sitting in ambush watching a deer trail on some private land I had access to. I had a short, uneventful post and was to meet up with my wife's uncle who wanted to do a small drive on his property. I met up with him at around mid morning and we formulated a game plan that would have him making a walk through a patch of woods in hopes that he would drive some deer my way. I set up along a field edge where the deer would hopefully pass by as they crossed the gap to enter the next wooded lot. The push yielded no action. We reset and did another drive through a different area of his land and that action also didn't push any deer. 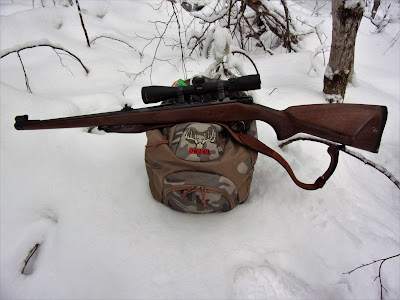 We took short break at midday and then planned another push on the property where I had hunted earlier that morning. I offered to make the push this time but my wife's uncle said he hated staying put while posting and he'd rather walk. "Fine by me", I thought.

I settled into my ambush spot and waited patiently as he made his walk. I heard no gunshots from his way and about an hour later he appeared out of the woods. No deer action was observed again.

Later that afternoon I spent the evening hunt watching another deer trail that no deer ended up traveling down. Things were looking slow for the start of the Wisconsin season, too.

Well before sun up the next day, I was out the door and heading to watch a trail that I had noticed the evening before. This trail looked heavily traveled by deer and I figured it might give the best odds of seeing a deer if I hid along, watching the pathway. The morning was cold and the air registered in at a crisp 13 degrees. I was layered up and had the right clothing system in place. For five hours I sat as still as I could, trying to mimic the life of an icicle. A fresh, light snow started falling and I watched as some of the most perfectly formed snow flakes I had ever seen, landed on my rifle. The blued steel  barrel and receiver made a great back drop as it showcased the white, crystal flakes.

Late in the morning the sun broke through the monochrome gray sky. It was the first time I had seen it's presence in over a week. It's rays filtered through the tree tops and it highlighted the snow as it fell. Each flake glistening like flecks of gold in the morning light. This view alone was worth enduring the cold for. I sat and took it all in. Even though it was only in the teens, I could feel the warmth of the sun on my body as it's rays slowly were absorbed by my clothing. The warmth didn't last. The clouds closed back in and made their gluttony known as they enveloped sun. As the gray darkness set back in, a raven passed overhead and let out a few guttural caws as if it acknowledged that it had helped steal the light away.

Around noon I packed up and headed out. Almost 7 hours of sitting in 15 degree temperatures was enough for me. It was then that I noticed I was not the only hunter in the area that morning . A bobcat had cut my tracks. Out of curiosity I followed it's trail for a little bit and seen where it began making a stalk, as it's belly began to drag in the newly fallen snow. I'm guessing it was making a sneak on a red squirrel, seeing that there were squirrel tracks all about. I wished the wild cat luck and hoped it had a more successful morning than I. 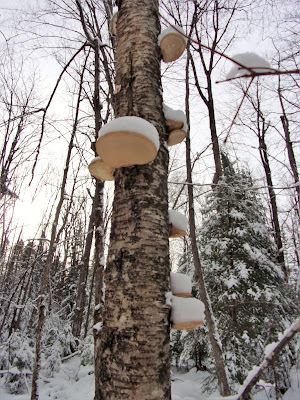 Later that evening I returned to hunt a hillside that over looked a thick stand if mixed hardwoods that had multiple deer trails crossing it. An old tree stand from days gone by still haunts the hill top. 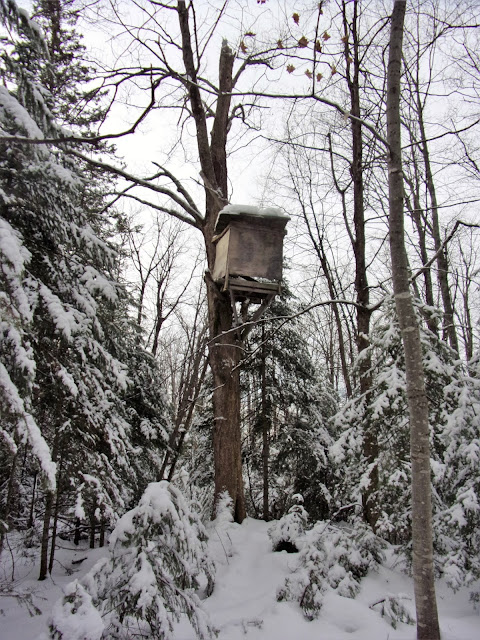 Again no luck. Snow still clung to everything making for poor visibility. Drives and pushes were coming to be a fool's errand with these conditions. Along with a good hiding spot tucked in some balsams, this hill side offered a decent vantage point and a few good shooting lanes that stretched out to about 70 yards. It's hard to tell scale in the photo below but that's vantage point from the hill looking down and the cross hairs are in a spot about 60 yards away. 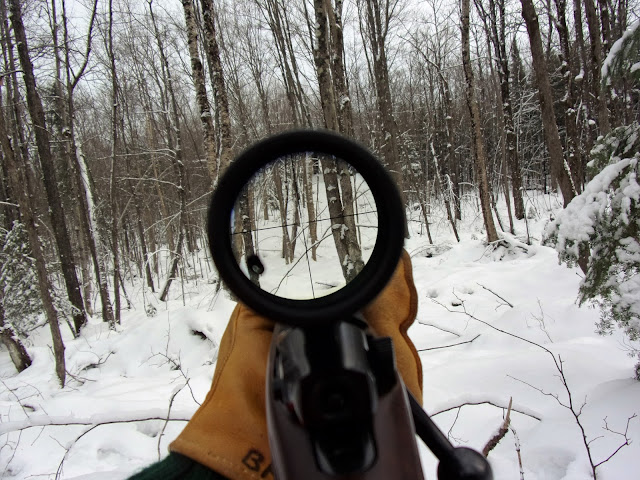 The following morning I hunted the hill top again and noticed there was flurry of snowshoe hare activity and the bobcat had made it's way through the area, presumably to hunt the hares. 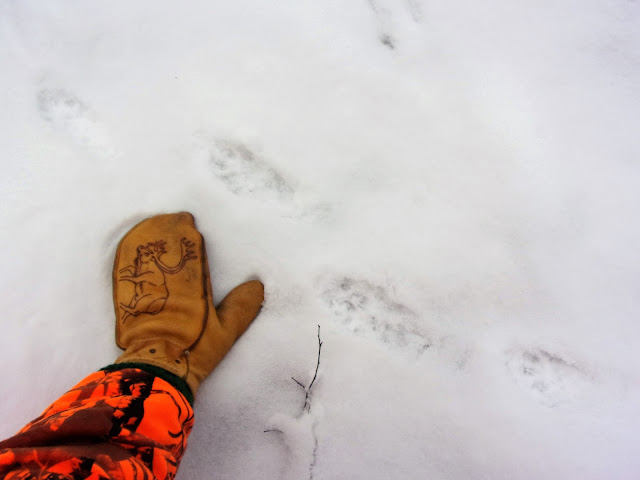 The following couple of days found myself posting in various spots and making small drives on two different properties. On the 3rd day, after a few fruitless drivers and posts, I found myself getting into my chosen ambush spot later than I anticipated and I paid the price by jumping a doe and a yearling that were already passing the very spot I had planned to hunt. I was able to scope them and confirm that neither were a buck. I seen nothing else and vowed to return to this spot the next day.


When I returned to this spot the next day, I was deject to find that a wolf  had crossed my old tracks and had passed through the area. It had been through some time after I had left the evening before. 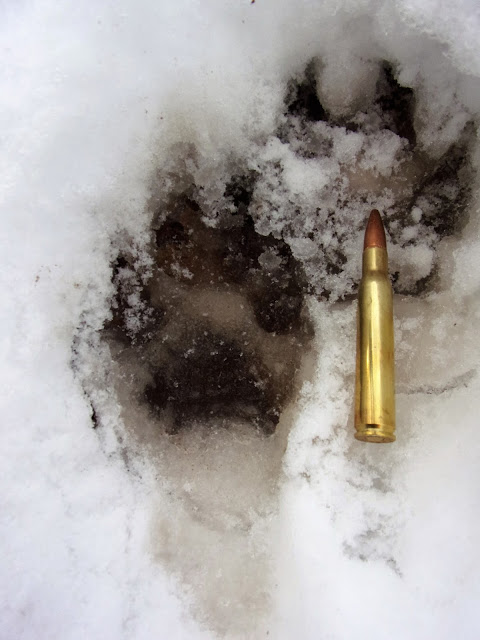 I set up there anyway and seen no deer. My rifle season was turning into a bust I knew there were bucks here and seen sign of there presence from this fall. But I was struggling just to see a deer this year.

I hunted for a week straight in two different states, on three different properties and had only seen 5 deer, and none were bucks. My first week hunting was over. I hunted in a Michigan again for a couple of evenings but seen no deer at my stand there either.

The following weekend I headed back to hunt Wisconsin in a last ditch effort to see if I could rattle up a buck on the last evening of their regular firearms deer season. 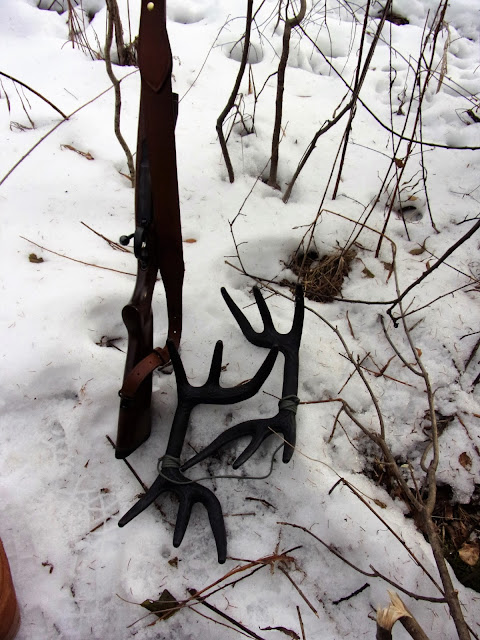 I hid myself at the base of a spruce and did my best to imitate the actions of two bucks engaged in combat. I have had success with this technique before and I was hoping I could pull out a miracle with it this time around. This area was thick and offered a lot cover so I was hoping there could be a buck lurking near by that would sneak or rush in to investigate what all the commotion was all about. 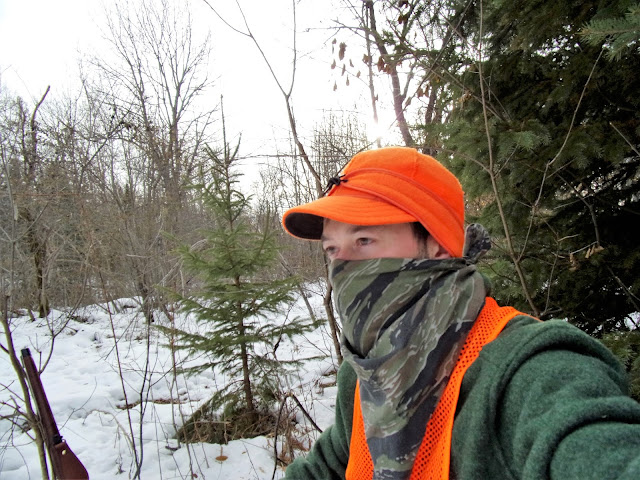 I rattled out a handful fight sequences throughout the afternoon and into the evening but, alas, it was not to be. Nothing showed up. It was a desperate attempt to make something happen out of nothing and when doing such an aggressive hunting maneuver you will either have a close encounter with a buck or see nothing at all...It's a feast or famine deal.

As I watched the moon rise over the tree tops I knew my season was over and I vowed I would do better next year. That's why they call this hunting, and not shooting. I packed up my gear and started the hike back out to the road. In this game, success is never guaranteed...but that's why I like it. 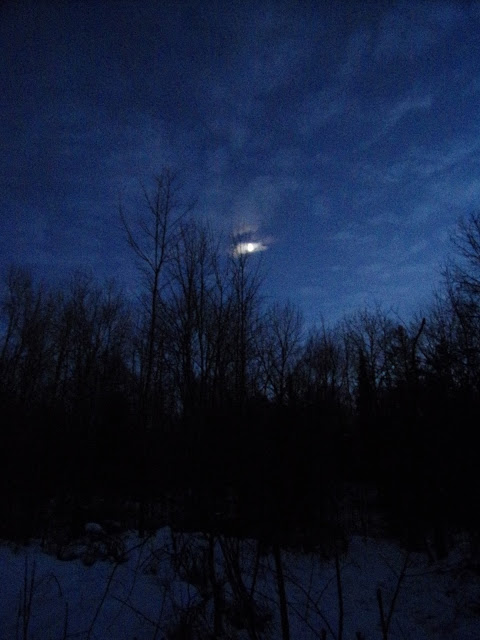