Winter's Icy Grip Holds A Wonderland Within It's Grasp.

Winter. Most life in my area revolves around this season. It's the hardest time for everything, humans included. This season of desolate cold and ice over shadows all others and makes it's presence felt for a good 5 months of the year.

Every living thing spends it's time preparing for it. The bear forages non stop from mid summer through the fall to prep for it's long slumber as the world freezes over it's life now suspended in animation. Deer too, put on fat with browse and mast consumption. Unlike the bear they have to push on and survive in the harsh elements of the season. Some don't make it and succumb to exposure, starvation and predation. And what of the predators? Nature plays no favorites. They also can starve and sometimes the prey they need is hidden by too much snow, sometimes game migrates making the search for food a never ending struggle in the deep snow. Sometimes the food sources just die off in a specific area. I once found a hawk frozen, talons clutched to a tree a limb where it had died in it's sleep during a wet, winter storm.

As far as man is concerned, he too has to prepare. Some people cut or buy wood if their homes are heated with it. Expenses rise due to increased energy consumption to heat dwellings. Commutes to and from work involve icy road ways, poor weather conditions and early mornings out removing snow well before the sun ever rises so one can leave their house. Doing most things outside are a chore in it's self and the cold breaks down both man and machine. Infrastructure fails as water lines burst or snow laden trees that can no longer bear the strain of their load cause outages as they topple onto power lines. Vehicles break down or won't start. Life in the north is not easy for anything. 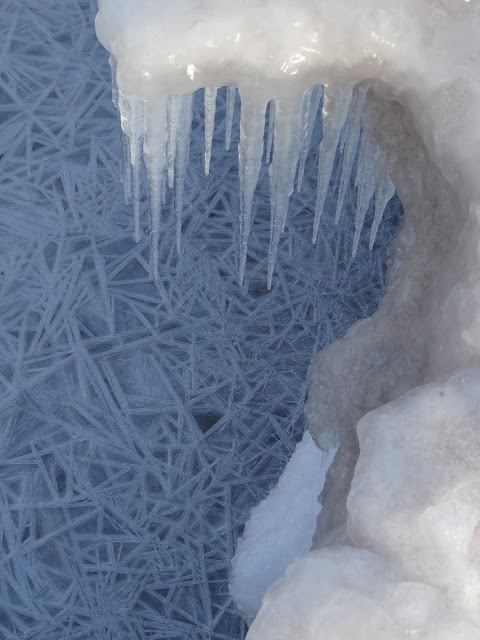 December started out mild, but subzero temperatures soon crept in and took an icy stronghold over the land. For most of December and early January, Michigan's Upper Peninsula was colder than far north Alaska.We are finally having our first warm up now with temperatures climbing back into the 30's and higher.

Lake Superior makes an almost perpetual cloud that envelops this land in the winter. The relatively warmer water from the lake reacts to the colder air and turns it into a cloud and snow generator. It's not uncommon to go for well over a week with out ever seeing the sun. At this latitude the sun rises late and sets early making for dark times when coming to and going from work. 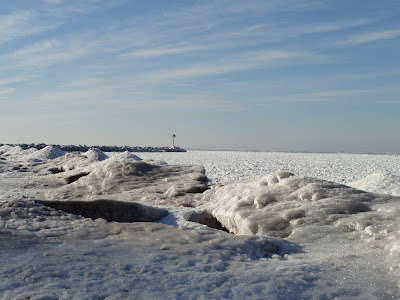 "Why live up here?" That's a question Northlanders are often asked. It's a very good question and everyone has their own answers. My answer is this: Because of the raw awesomeness of nature it provides. That's right. This cold and oppressive weather weeds out the weak of will and mind leaving only those with stubborn fortitude to live within it's frigid realm. This naturally creates a land with a low human population, which in turn, says relatively undeveloped.

Although the season can seem cruel and punishing, I love the sheer beauty that winter brings with it. This region abounds in picturesque Hallmark Card images and provides sights that can only be found in places where few tred. The region is transformed into a veritable wonderland. Here are a few things that I like and find interesting about my world as it becomes changed by the depths of winter. 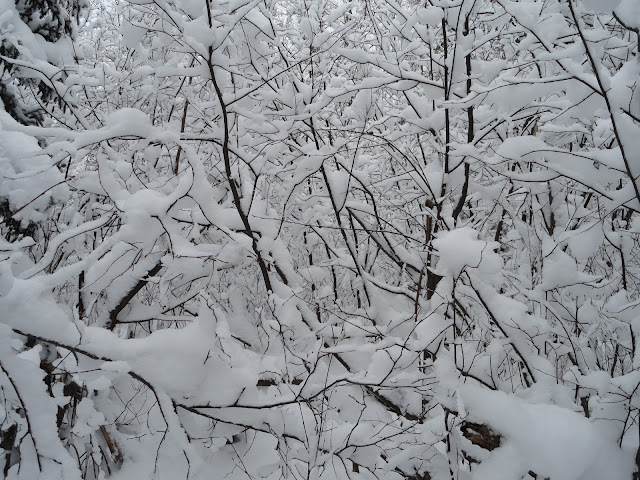 Fresh fallen snow can make an area that you know like the back hand seem like you have been dropped off into a totally alien world. 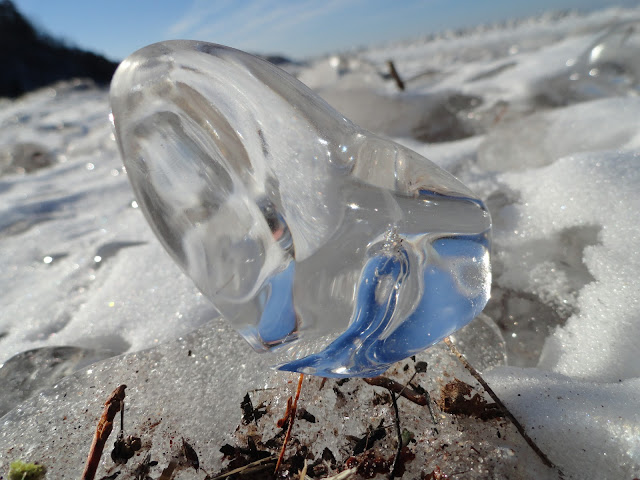 Ice. Lake Superior becomes a still life in the coldest years. The turmoil of the lake is trapped in time and for a while it sits placid in a state of suspended animation.


Strange patterns become locked into it's icy matrix. Some look like sheets of paper. 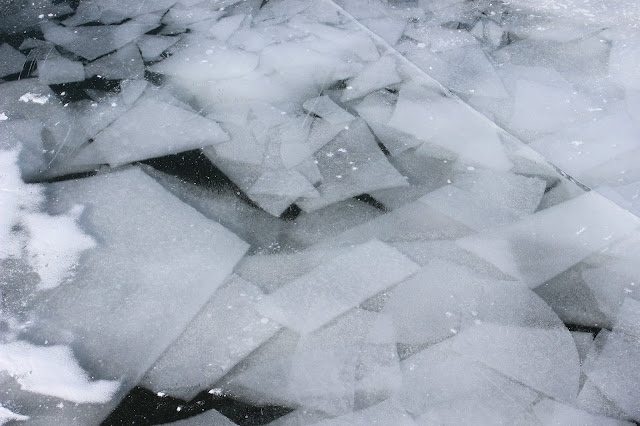 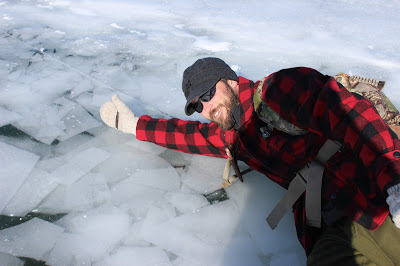 Others are comprised of bubbles frozen in time and space. 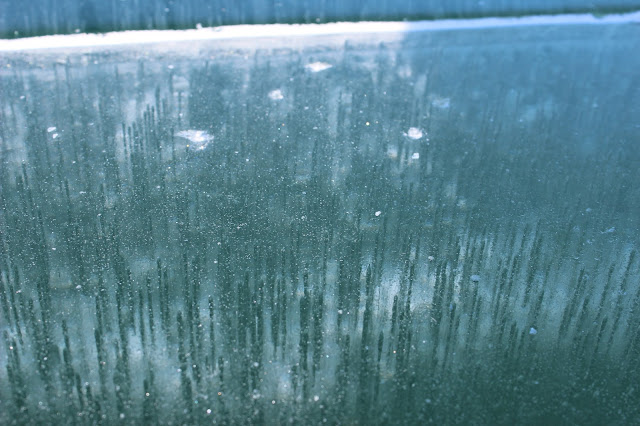 This ice appeared to be at least 3 feet thick. 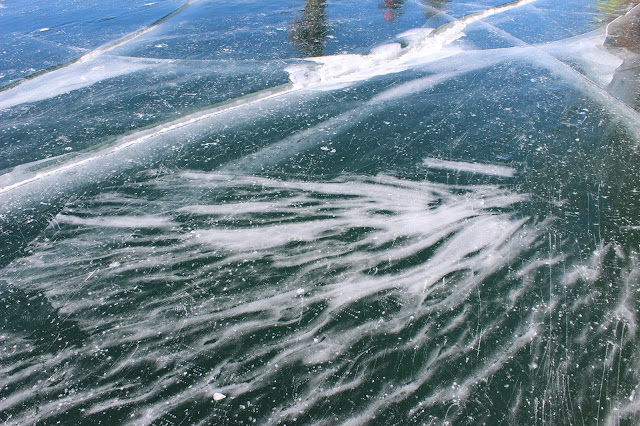 The shoreline of the lake contains some fantastic "sea caves". Some of the best of which are located in the Apostle Islands National Park in northern Wisconsin. The greatest of the Great Lakes works it's magic here, sculpting nature's art like a woman possessed by an unquenchable urge of creativity.

It gives birth to magnificent forms and features such as these formations along the winter ice caves... 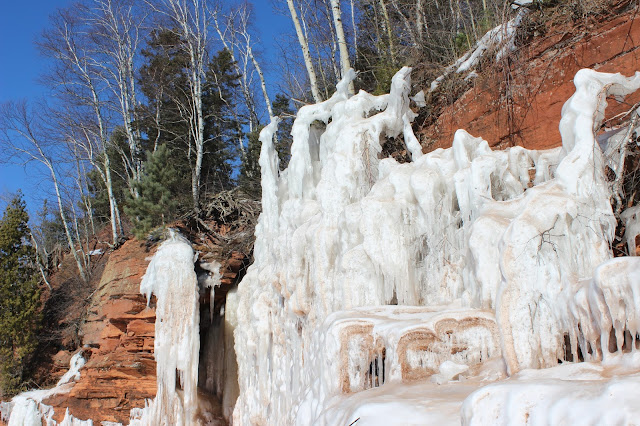 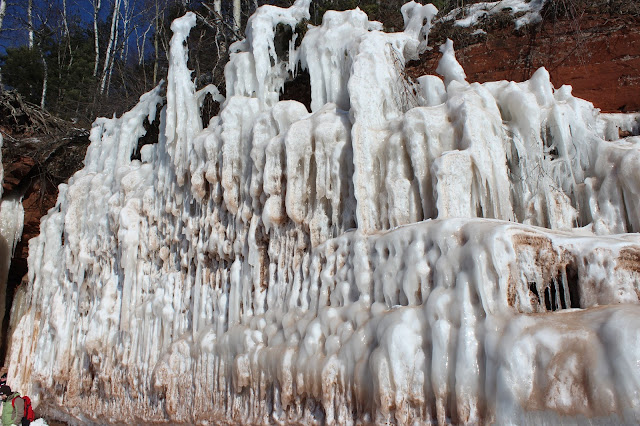 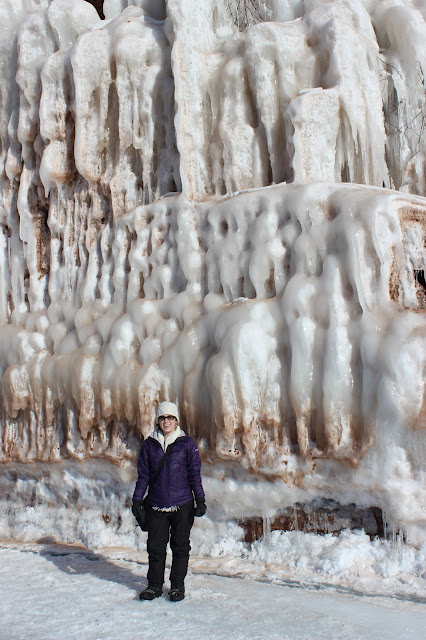 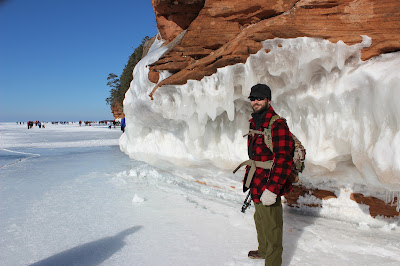 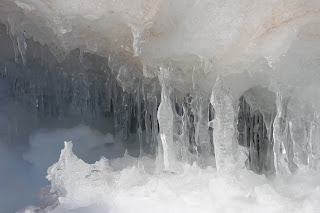 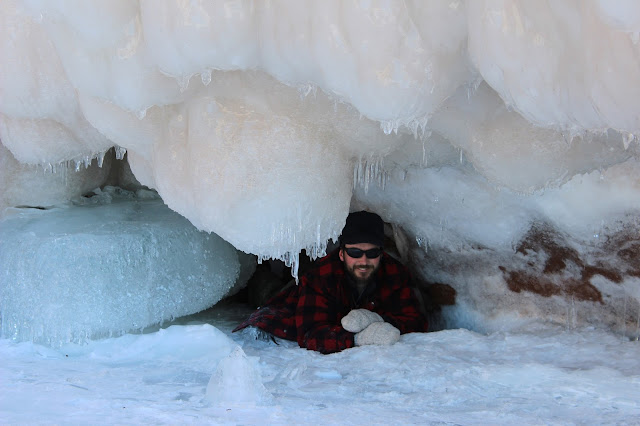 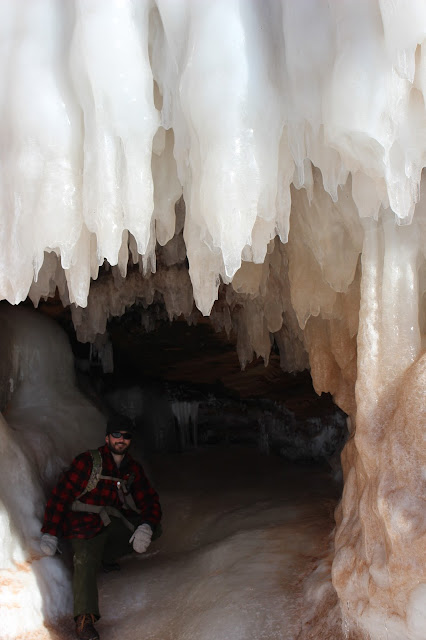 Some of the caves harbor amazingly delicate ice crystals 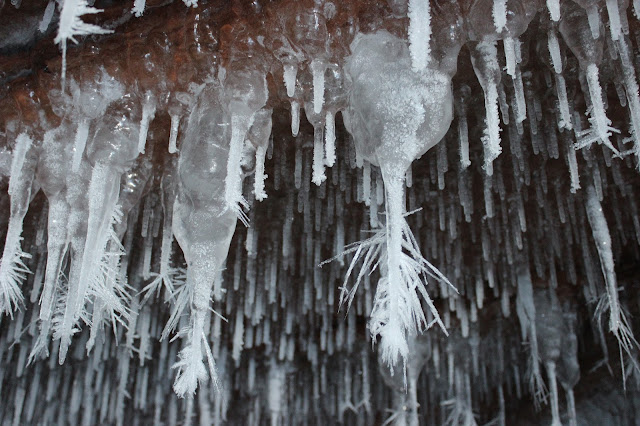 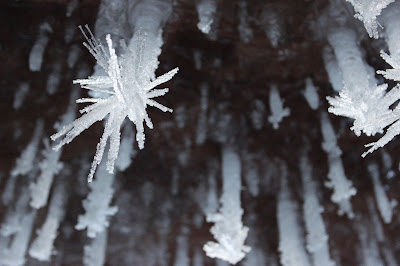 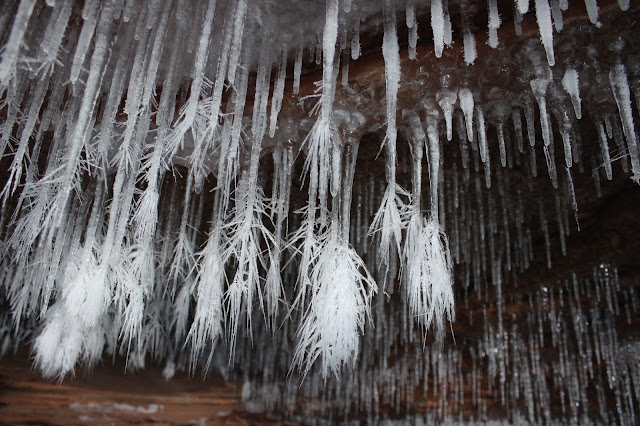 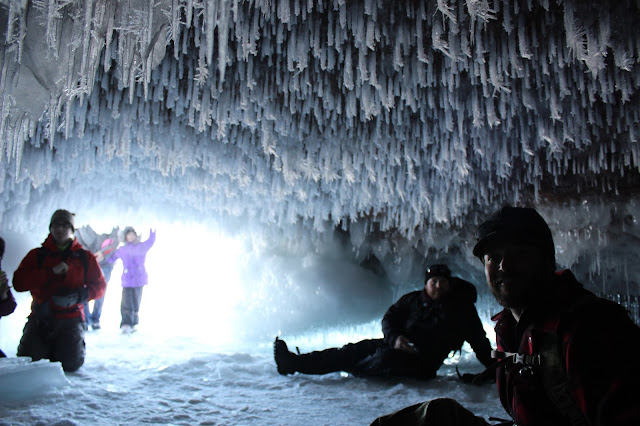 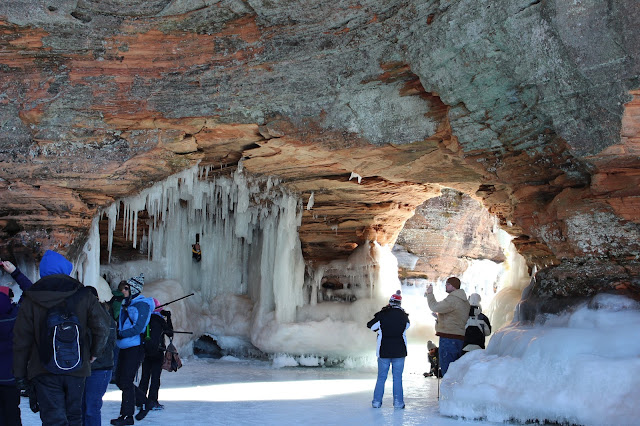 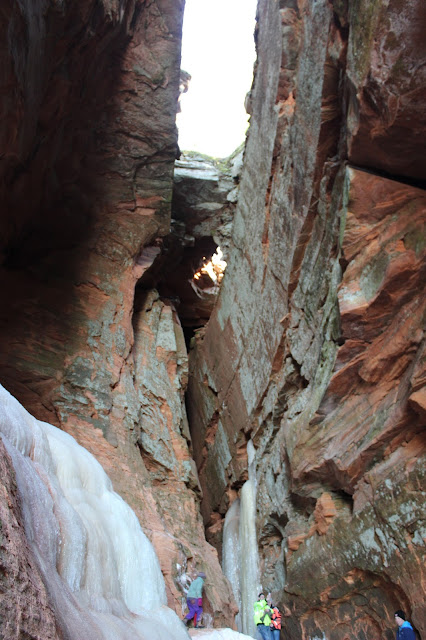 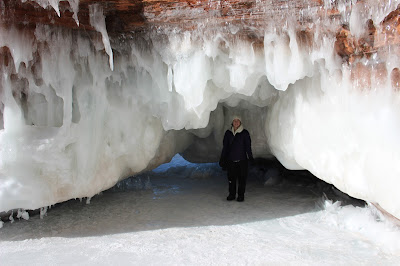 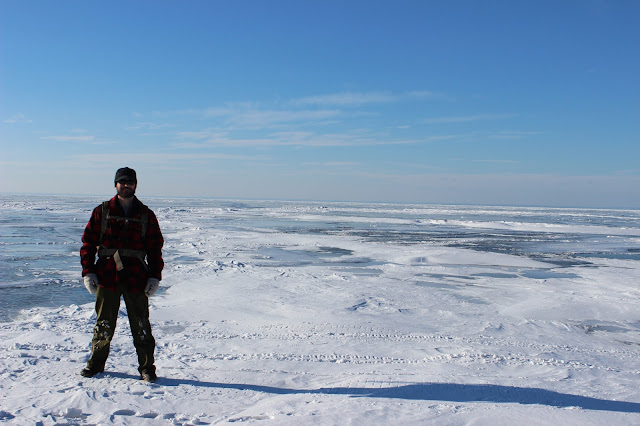 Living near this magnificent lake always brings many opportunities to see nature's raw beauty and this body of water never fails to deliver. It's moods in the winter months make for some magnificent viewing in and around it's rugged shore line. 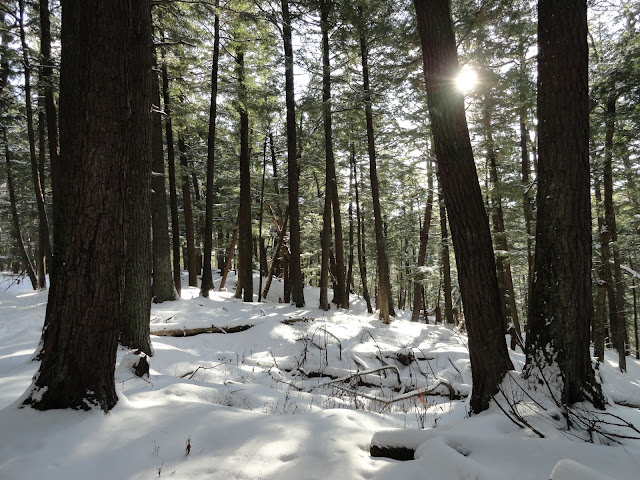 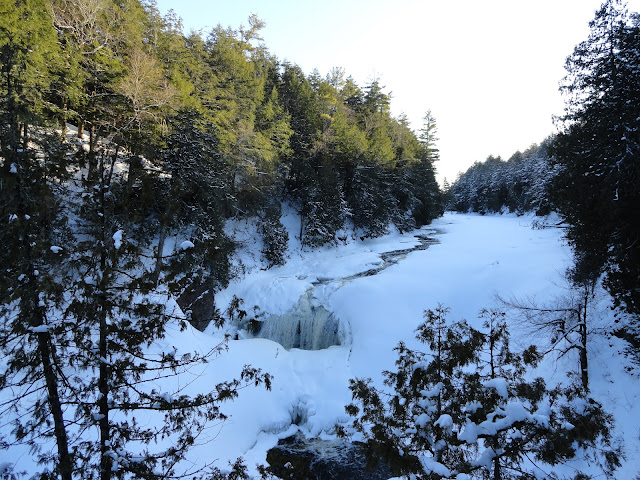 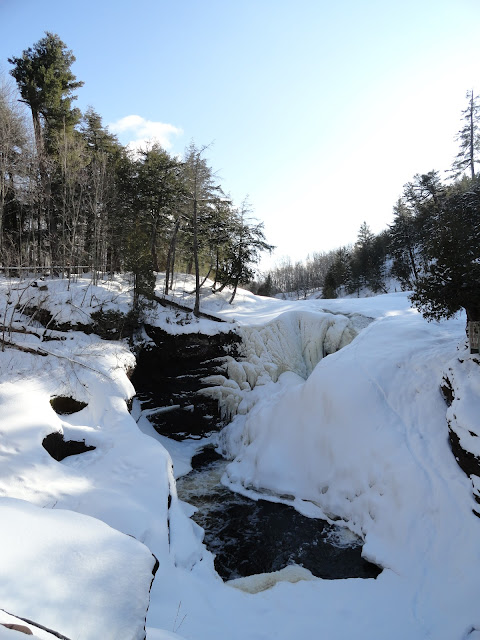 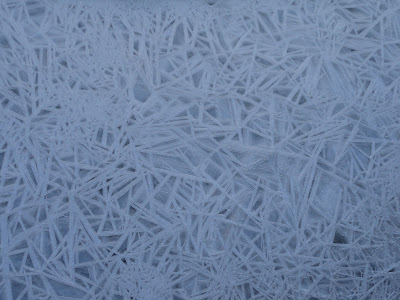 Fantastic vistas, amazing landscapes and natural ice sculptures make putting up with the harshness of winter all worth while. At least for me it does. Many people stay indoors for much of the winter and complain there is nothing to see and do. All one has to do is venture out into the cold to witness this amazingly beautiful and ever changing landscape that I call home.
at January 23, 2018