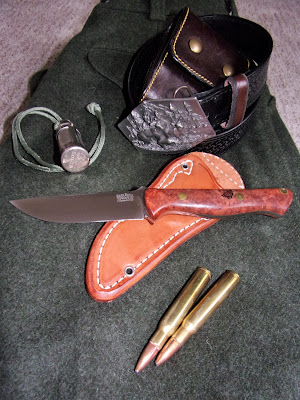 Opening day of the Michigan 2017 firearms deer season found myself entering the woods at well before sunrise on a cold, and damp mid November morning. There was still snow on the ground, but it was starting to melt. As I walked into my stand I noticed some fresh grouse tracks on the snow and I flushed the bird in just a few steps after seeing them. It must have just come off of it's roost, or perhaps it had insomnia. I had never flushed a grouse so early in the morning before and thought it odd that bird was walking about well before daybreak.

I noticed some fresh deer tracks, that by appearance seemed to have been made only a few hours prior. That was a good sign.

I reached my treestand, made the climb into position and loaded my rifle once I was situated. The temperature was at 32 degrees, but the air was damp. As the the sky lightened, I had a visit by a couple more grouse. One bird darted along on foot and sped away through the woods soon after it made it's self known. Behind it, a male appeared and started to do a full on mating display with it's neck ruffs exposed and tail fanned out like a miniature turkey. The female was long gone but this male seemed to think she was still near by. It started a half-harted drumming sequence but gave up. Then, still in full display, it rapidly zigged and zagged in his off season mating ritual. I also found this behavior odd seeing that they mate in the early spring. At least it was a curious source of entertainment for the time being.

As the morning wore on a low fog settled into the skeletal branches of the forest canopy. A light, freezing mist soon followed. For almost 5 hours I sat, as still as I could in these conditions, just waiting to see the movement of a deer against the snow covered backdrop. Nothing came. My vigil was only to bear witness to a handful of grey squirrels as they milled about the forest floor seeking to add to their winter food stores. When in a ground blind I normally sit from sunrise to sunset, but when perched in a treestand I can only tolerate around 5 hours or so of sitting motionless in near freezing temperatures. I headed out for some lunch at around 11:00 A.M. and got a chill on the walk out.

After a mid day pause I returned to the stand and noticed no sign that any deer had made an appearance in the area I walked through since that morning. It was now in the mid 30's and the mist had turned to a light rain. The only thing of interest that happened that afternoon was the sighting of a small bird of prey. A cooper's hawk perhaps. It perched in a tree top near me and it surely must have noticed the gray squirrels that scampered out of sight upon it's arrival. I watched as one red squirrel was caught in the open while perched on an exposed branch. It froze solid and stayed that way until the hawk flew off, seemingly uninterested. As the temperature dropped the rain turned to into large, heavy snowflakes that quickly got to work to replenish what had been depleted by the rains from earlier in the day. As the flakes piled up, silence and darkness enveloped the woods. I headed out as quietly as I could wondering what the next day would bring.

I was up again at O'dark thirty getting ready to head into the woods. About 5" inches of snow fell that night and it was plastered to all the trees. Though it makes a pristine, picture book image, the snow on the trees does nothing to aid in hunting conditions. The snow acts much like thick foliage and shortens the distance of viability in the forest making it harder to see game at any distance. The air still felt damp but with the fresh snowfall and temperatures at a crisp 24 degrees, the mood of the forest felt different. I noticed on walk into my stand that deer had already moved through since the snow had stopped falling some time in that night. There were a number of fresh tracks on the game trails and others that just meandered aimlessly through the woods. 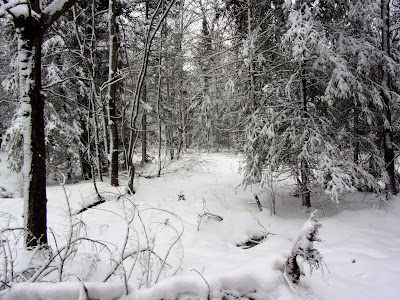 After I was back up in my stand my mind started to wander to exactly one year ago that day to when I sat in this same spot and shot a decent sized 4 point buck. The weather was much warmer then and the buck appeared out of nowhere cruising on a side trail that ran past the stand. Two fast shots on the move took my winter meat for that year. I was hoping recreate that event today.

After I was done reminiscing, I anxiously awaited for daybreak and what it might bring. The answer was nothing. Nothing moved that morning after sun up. The deer had moved after the snow storm had broke the night prior and there was new activity in the woods. I headed out before noon and returned again for the evening hunt. With the snow on the trees, any deer that would come by would only give me only seconds to prepare for a shot and the new fallen snow would also mask any noise they might make walking making it impossible to anticipate their approach from a distance. 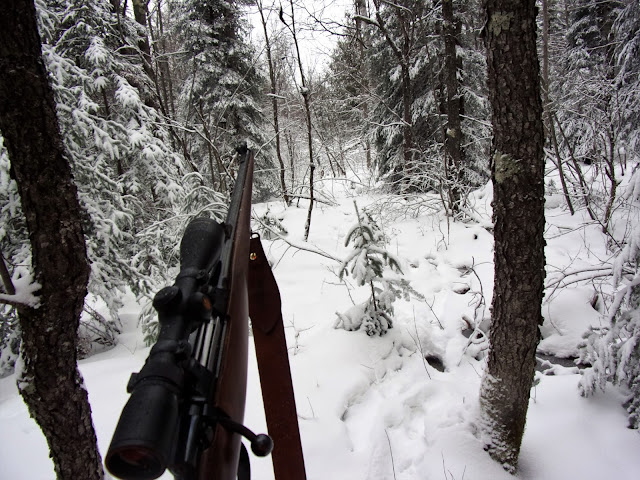 Shortly before the light started to fade as day turned into evening, I thought I could faintly hear the sound of foot steps approaching in the snow. I stayed still and strained to listen. I heard them again and knew an animal was approaching me from behind. It paused. I remained motionless listening to my heart start to pound with anticipation. Still nothing. I waited...It waited. Then with a long, sharp nasally blow the jig was up.

When deer smell danger or something foreign to them they often "blow" making a loud noise caused by the rapid expulsion of air through their nostrils. This serves two purposes. The first being that it clears all the current scent particles out of the deer's olfactory receptors so it can perceive only the new scents it's now trying to take. This can make a more clear "picture" for the deer to decipher what it's actually smelling or trying to smell. This helps the animal to determine what danger might be near. The second purpose is to send out an audible alert so other deer in the area that might be upwind know something is up and they should be on alert.

The deer continued to blow about 10 times and then it thundered off into the unknown. I'm guessing it was a crafty old doe. Usually a buck won't repeatedly blow when it smells danger. It will either blow once and explode out of sight or it won't blow at all and just slink away with out it's presence ever being reveled.

Dejected by being busted, I climbed out of my tree and packed up my gear for the walk out into the darkness. 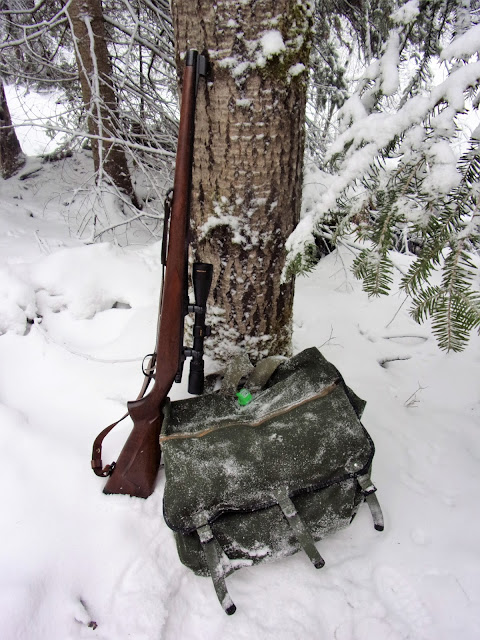 The conditions were identical to the prior day. Snow was still on all the trees and the temperatures remained in the mid 20's. I sat through the day with the only activity being the squirrels, chickadees and tiny creepers that amuse me by scooting themselves up trees while looking for a meal. 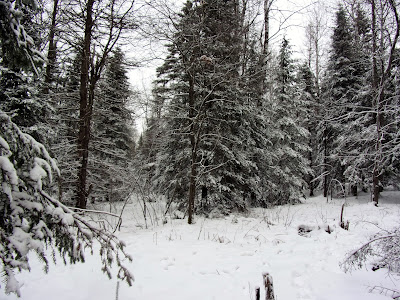 Close to dusk I suddenly seen a deer materialize off to my side. It was a large doe. It quickly slipped behind some trees and I slowly started to move to face it's direction. Following the doe was a yearling and as I looked past the young deer, I seen another set of legs approaching through the branches. I was hoping it was a buck on the trail of the two other deer. I slowly started to get into a shooting position. I needed to make smooth but deliberate movements. If the third deer was a buck I would only have a couple of seconds to acquire a shot if the deer followed the same path as the other two. Just as I was setting up for a possible shot and before the third deer came into the opening, the doe that was the first in line popped out from behind the trees it passed. It must have caught my movement as I was reading for a shot on the third deer and it spooked. It ran off taking the third, mystery deer with it. All I could see were it's legs vacating the area.

Some times you don't know what the right move should be. If you wait too long and be too still you may miss the only window of opportunity you might have at a shot due to not reacting in time. If you move too fast or too soon you could give your position away thus ending any chance before it ever presents it's self. These decisions all have to be made in a split second while under pressure. This was one of those scenarios that didn't have a clear answer. Either way I cut it, I was taking a risk by choosing either choice.

With the deer now gone I was cursing myself for blowing another possible opportunity. I sat silently, hoping something else would show up before dark.

About 45 minutes later and just before the light started to fade, another deer materialized out of nowhere into the opening I was watching. It was a large doe followed by a yearling button buck. I was trying to think if the yearling I had seen earlier was a button buck (yearling buck) but I could not recall, or didn't pay attention due to the presence of the third mystery deer. I had a feeling these were part of the same group that spooked out earlier but I could not be sure. I sat ready with anticipation. The two deer milled about browsing in the opening I was watching. A few minutes later I detected movement to the north and a third doe entered the mix. They all walked around browsing and they were extremely jumpy. Any little bit of snow that fell off of a branch with cause them to flinch and would stop and jump at the sight of any squirrel that would happen by. They were very paranoid. Just before darkness settled in I practiced moving slow to mimic the movements of taking a shot on one of the deer. I painstaking went through the motions of raising and aiming my rifle at one of the does. They were close. Only 16 yards away and the air was dead still. One sensed my movement and ran a few steps and stopped but I was able to acquire both deer in my scope and considered the practice run to be a success. The deer left and it was time for me to leave also.

My first few days hunting in Michigan were now over. I left for the time being so I could hunt the opening first few days of the Wisconsin season, which happened to start the following day. If there was more deer activity at my Michigan stand I probably would have stayed on a little while longer. No Buck so far. We'll see where the next hunt leads. 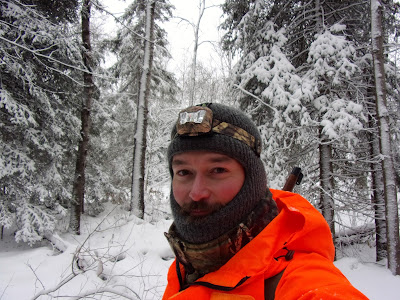