Earlier this fall my friend J.D. and I went to scope out the prospects of catching some salmon at the Black River Harbor. This harbor is one of only two harbors that are located within the National Forest system. And the only National Forest harbor in the Great Lakes region. The general area around the harbor offers some fantastic woods roaming opportunities and is one of my favorite places to spend time in the woods. There are five decent sized waterfalls and some great wilderness to explore all along the river. A section of the North Country Trail also cuts through the area. I've hiked five miles inland on this section of  the NCT and have never seen any sign of a human being. I also have found wolf killed deer literally at the end of the first set of steps that lead to the trails to view the first set of falls just up from the harbor's mouth. It's great, fast access wilderness at it's finest. 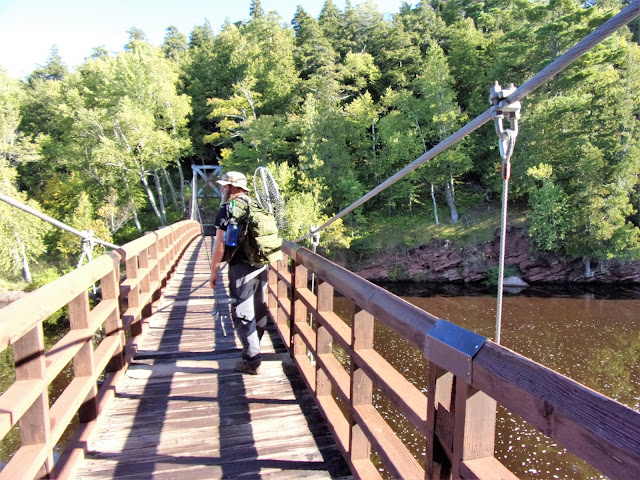 We crossed the suspension bridge and decided to try out luck out off the break wall on the northern most side before heading up stream. 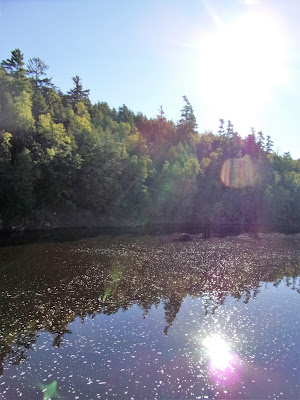 The weather was fantastic. We couldn't have asked for a better day. 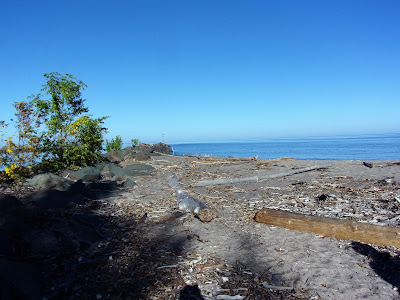 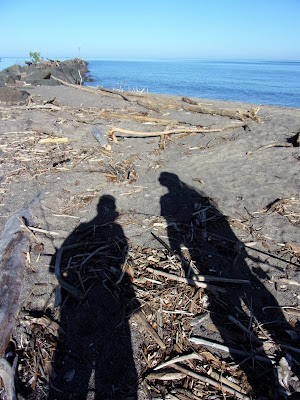 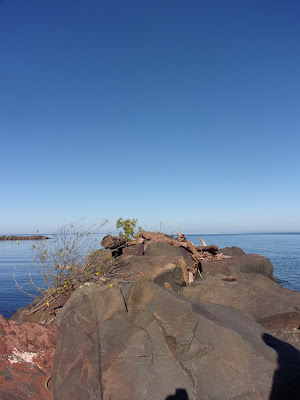 We fished off the rock wall for about an hour and J.D. missed a hook up with what I presume was decent sized herring. We had a few schools of herring follow up our lures but no strikes. The trout and salmon weren't cursing the lake edge this morning.

J.D. spotted this large, dead lake trout floating out into the lake. Who knows how it met it's fate? 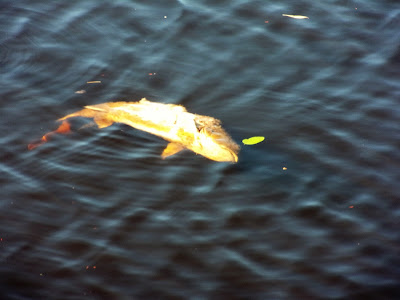 We fished off the break wall for about an hour or so and had no action other than the flirtations by those schools of lake herring so we decided to pack up and head inland to see if any salmon were in the river it's self. 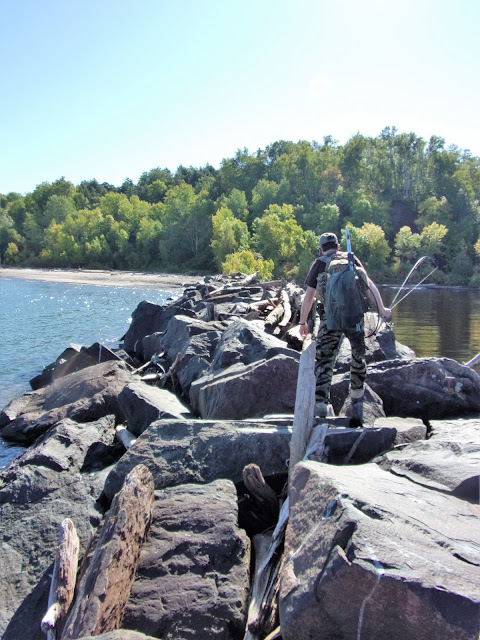 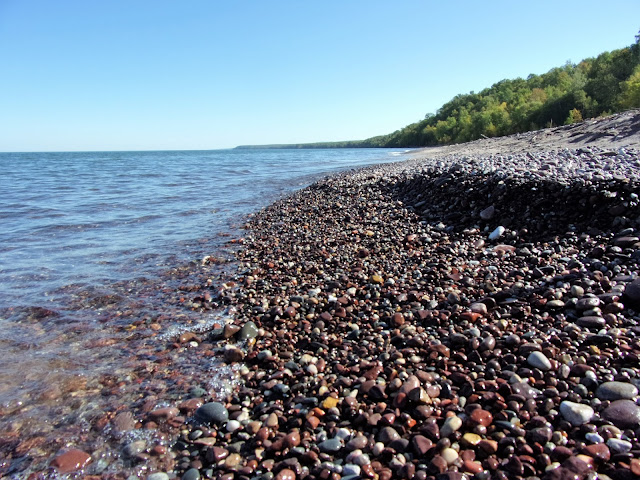 I never tire of gazing at Lake Superior's shore line.

Usually there is some kind of nature art to be found along this section of beach. Some beach goers from the recent past did not disappoint. 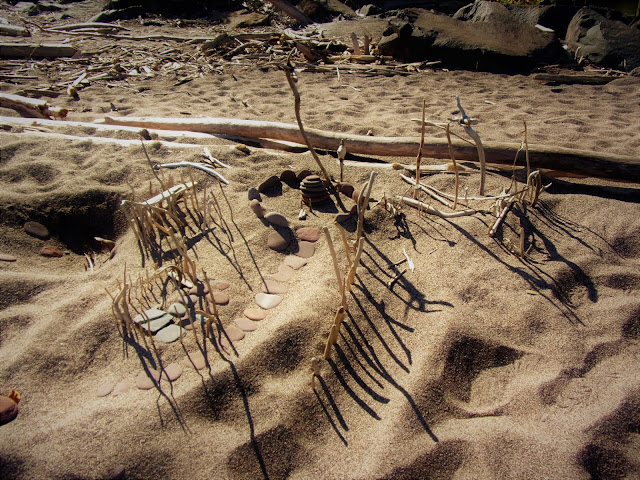 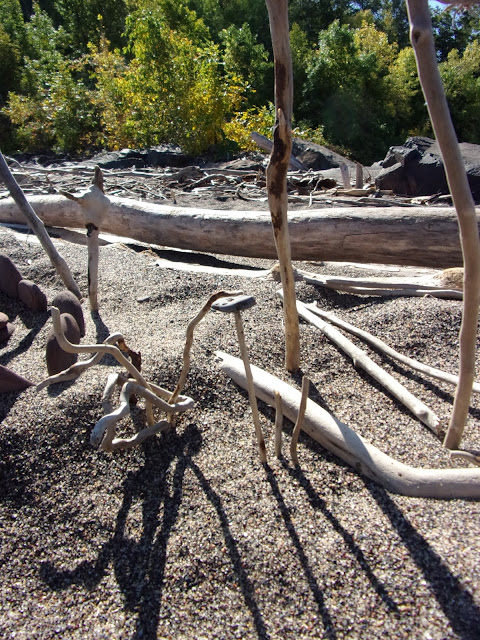 We hiked up to the section of the North Country Trail that leads to Rainbow Falls. This is the first water fall up from the harbor's mouth. I always enjoy this jaunt through the woods to get there. There is always something interesting to see and the trail it's self is hemmed in by some ancient forest growth. 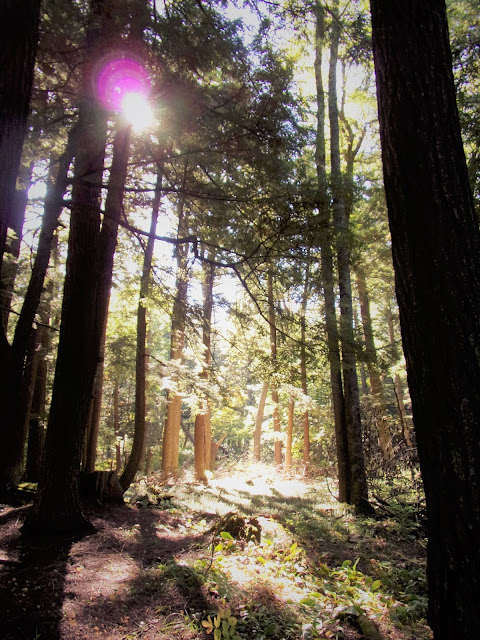 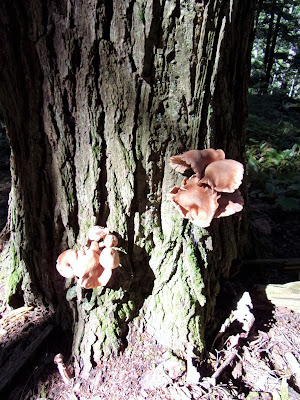 Just before I snapped the above photo a mouse darted into that nook of a hole on the lower left base of this tree trunk.

Every time I walk past this magnificent white pine, I stop and marvel at it. Who knows how old it is and what people from across the ages have walked past it. This immediate area contains some of the remnants of the very first European people to settled here along this section of Lake Superior and long before they came, this trail was used by the Chippewa and has existed as a prehistoric trading route. The proximity of  the Black River's mouth that spills into the greatest of the Great Lakes has probably seen much use in the ancient copper trade that took place here eons ago. 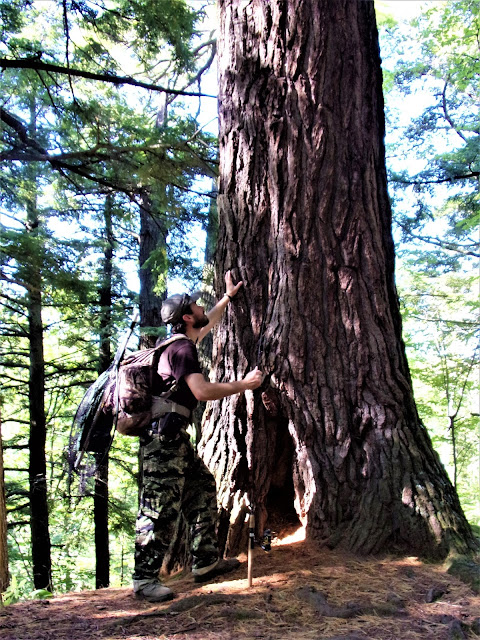 We continued down the trail and through the woods until we reached the spot where we'd fish for the rest of the day. 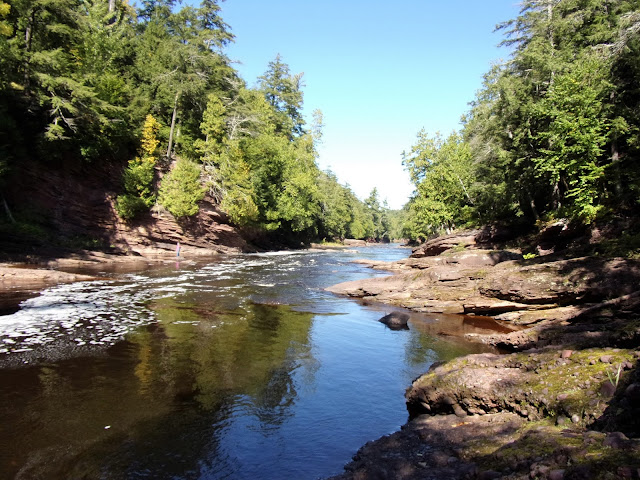 We set up shop and soon had a few chinooks surface near us. We now knew they were in. For the next 45 minutes we watched random chinook, choho and pink salmon make sporadic appearances all around us. Some would swipe at spawn sack but not engulf it and lures seemed to be ignored These actions are usually par for the course when fall salmon fishing. The fish only concentrate on the drive to breed and tend to ignore any urges to feed. many fish know this is a one way journey so there is no need to feed. There is only an unstoppable primal urge to pass on their genes. Hell bent, they will attempt to navigate as far as they can upstream until they can travel no further. There they will try to spawn or die...often accomplishing both. I admire this droning, push to complete their destiny. Unlike humans, they innately know their purpose in life and it's as clear to them as the water that they fight against to reach their fate. 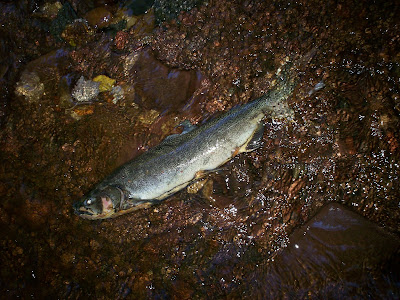 J.D. and I continued fishing and we had a few close encounters but no good strikes. He spotted a pair of pink salmon that were continually advancing in a shallow flow that was just down from and we focused on trying to hook into one but no dice. I was able to eventually drift my spawn sac right into the mouth of one of the pinks and when I set the hook, I just yanked it right out with out touching the fish's jaws in any way, shape or form!

With no meat on the stringer, we decided to break for a river side lunch. We both enjoy meals in the field and this one was no exception. 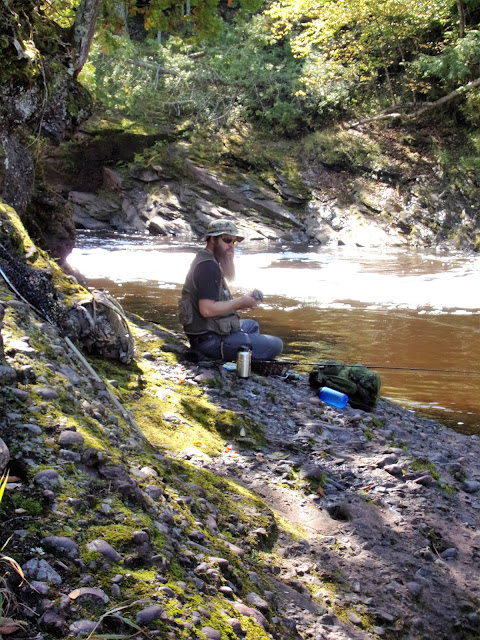 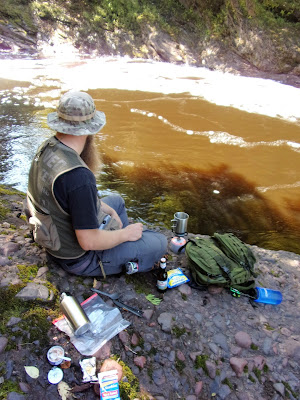 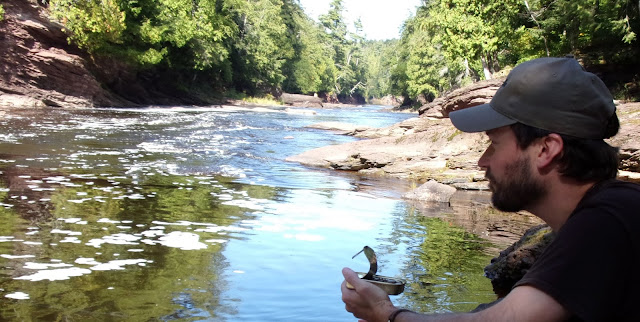 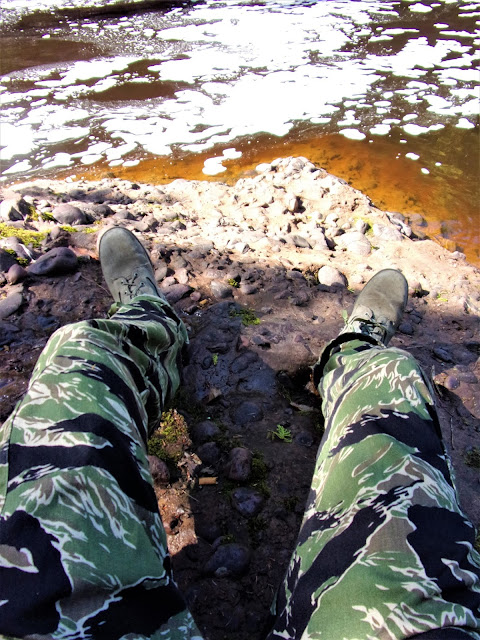 After out meal, we hiked up around the pool above the river and we descended to fish the scour hole of Rainbow Falls. We witnessed many chinooks and chohos trying to make the impossible leap to the top. It was quite a sight. I tried to film the action multiple times and have a couple of short segments of jumping salmon.

This segment has one leaping fish. If you look close you can see it leap in the center of the screen and watch as it smashes it's self into the rocks and gets swept back down into the pool.

Here is what it's like trying to fish that pool. Only the river knows how many fish are stacked up down there in the churning water. 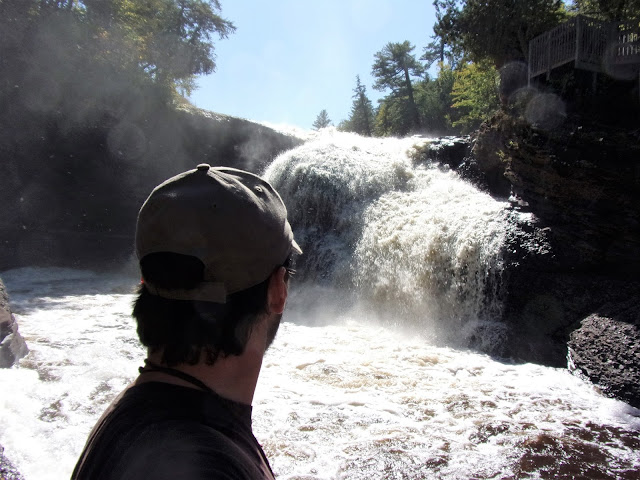 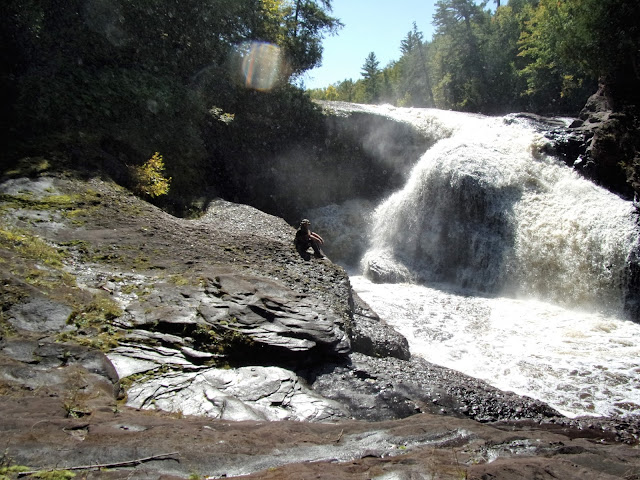 The above photo shows just part of the scale of the falls. J.D. is still about 20 yards from then end coroner of the plunge hole. The falls drop 40 feet from the top.

We fished the waterfall's plunge pool and I thought a had a couple of hits but our efforts proved to be fruitless. We just enjoyed the deafening roar of the water and the opportunity to be immersed in this fantastic day on the river. I've said it before but I am truly fortunate to live in a place that can offer me so much and ask for so little. 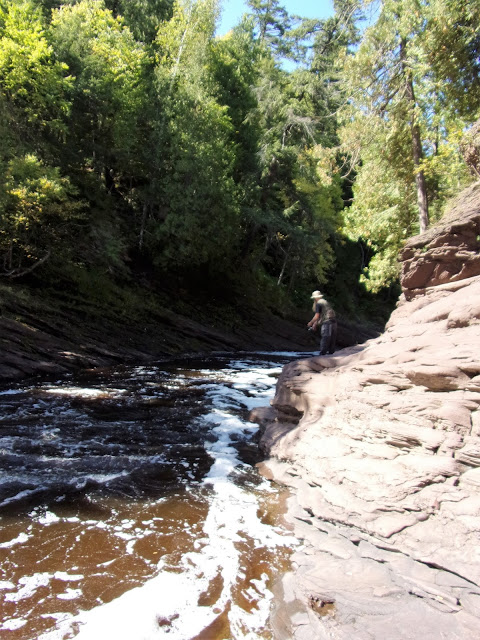 The previous year, J.D. was standing at about the same place I was when I snapped the above photo. He slipped and fell in. The current nearly dragged him under that ledge he's standing on. He was able to stay cool, keep his wits about him and he stayed above the water with out being dragged down. He ended up crawling out of a pool that was around the river bend from he's standing now and was washed down stream for about 30 yards. On this trip I watched as another fisherman on the opposite side of the river slipped and smashed his head into the rocks. He continued to slide down to the river's edge and nearly fell in. He was wearing chest waders and I'm sure if he took a complete plunge he would have had a less than fortunate outcome as those waders surely would have turned into a hundred pounds of water weight strapped to his body. Two men, in the past two years have died on this river. Now that I think about it, I guess sometimes the river does ask for more than a little in return. Some times it decides to take a lot. 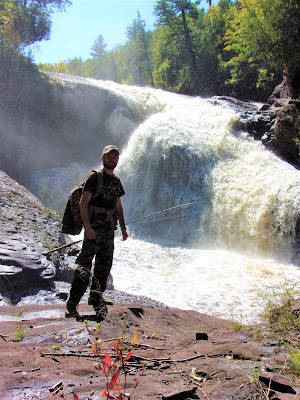 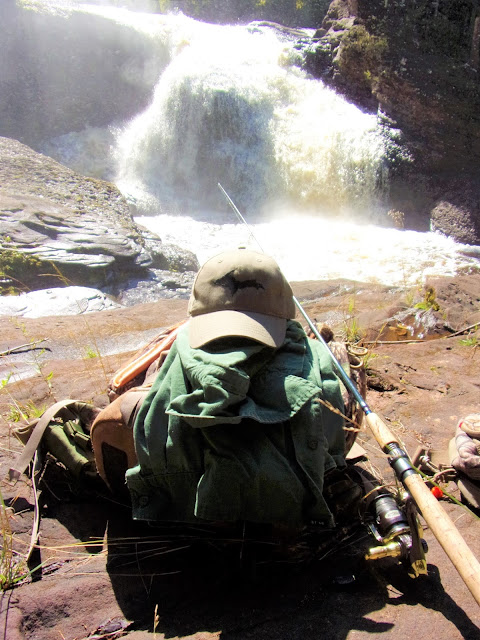 No fish or humans were harmed too much in the making of this trip.
Thanks for looking.